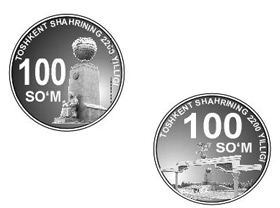 Tashkent, Uzbekistan (UzDaily.com) -- Central Bank of Uzbekistan will issue new coins dedicated to the 2,200th anniversary of Tashkent city with face value of 100 soums from 1 September 2009.

The coins were developed from steel and covered with copper-nickel alloy of white color, the Central Bank said.

One of the coins displays Mustaqillik and Ezgulik (Independence and Goodness) Monument at the front side. It also portrays “100 so’m”. There is also inscription “TOSHKENT SHAHRINING 2200 YILLIGI” (The 2,200th anniversary of Tashkent city).

Ezgulik Arkasi (Goodness Arch) Monument pictured at the front side of other count. Above the monument, there are inscriptions “100 so’m” and “TOSHKENT SHAHRINING 2200 YILLIGI” (The 2,200th anniversary of Tashkent city).

Reserve side of both coins has arm of coat of Uzbekistan and inscription “O’ZBEKISTON MARKAZIY BANKI” (Central Bank of Uzbekistan). In the bottom center of the coin, there is year of issue of the coins (2009).