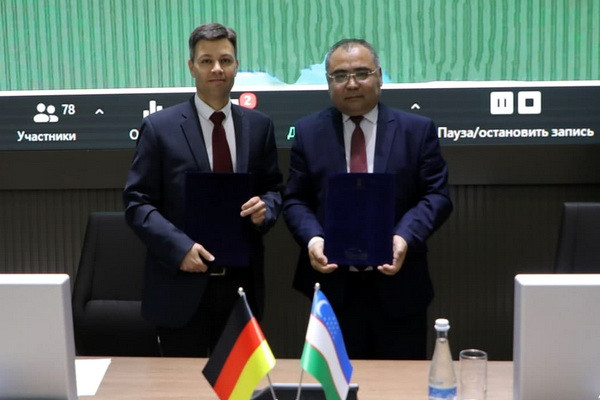 Tashkent, Uzbekistan (UzDaily.com) -- On 10 May 2021, an official ceremony of signing a Memorandum of Cooperation between the Country Director of the German Society for International Cooperation (GIZ) Joerg Pudelka and the Minister of Innovative Development of the Republic of Uzbekistan Ibrohim Abdurakhmonov was held to launch the technical assistance project "Modern Innovation Centers - 2022" for a total amount of 250 thousand euros.

The event was attended by the Ambassador Extraordinary and Plenipotentiary of Uzbekistan to Germany Nabijon Kosimov, high-ranking adviser to the Minister of Innovative Development Karsten Heinz, as well as heads of technoparks of Uzbekistan and Germany, vice-rectors of higher educational institutions.

During the seminar on "Innovation centers - catalysts for innovation" it was noted that this project was highly appreciated and supported by the Federal Ministry for Economic Cooperation and Development of Germany. For the first time in the history of the GIZ society in Uzbekistan, a project is being implemented in the field of innovation. The parties noted the importance of developing the industry, training qualified human capital and intend to develop cooperation in this direction in the future.

- Today, the issue of personnel, their qualifications in creating innovative infrastructures in the regions of the country is of great importance, - said the Minister of Innovative Development I. Abdurakhmonov. - The development of a general concept for centers for the commercialization of scientific developments under the responsibility of the vice-rectors for innovation is a very important task. The Memorandum of Understanding between our Ministry and GIZ will serve as an impetus for the development of innovation centers in the country, raising the sphere of governance to a new, higher level.

Within the framework of the Memorandum, on the basis of a GIZ gratuitous grant, 15 Uzbek scientists will be sent to Germany for advanced training, a manual "On the management of innovation centers" will be developed, and licensed documentaries on the field of innovations in Germany will be presented to the general public of Uzbekistan.

Joerg Pudelka noted that Uzbekistan remains a priority country in the Central Asian region and the German side intends to provide comprehensive assistance to the development of priority sectors of the national economy.

It should be noted that this project will play an important role in strengthening certain areas and the quality of human capital in Uzbekistan. The German Society for International Cooperation (GIZ) has been implementing projects in Uzbekistan commissioned by the Federal Ministry for Economic Cooperation and Development (BMZ), as well as other federal agencies since 1992. Currently, GIZ supports reforms in the field of economy, health care, education, protection of natural resources, as well as the development of social and cultural integration. The development of innovation centers is a new direction between Germany and Uzbekistan, which is expected to become one of the key areas of cooperation in the future.