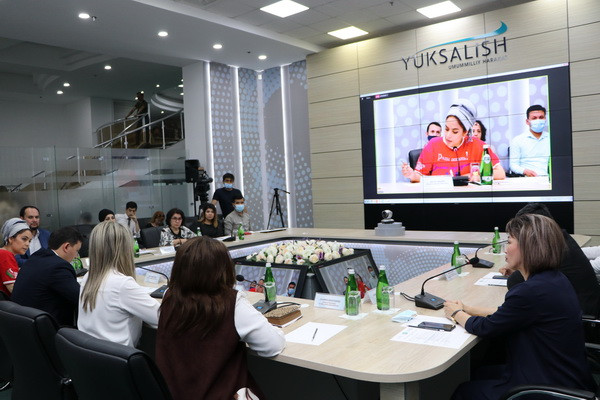 A charity marathon dedicated to children with cancer diagnoses starts

A charity marathon dedicated to children with cancer diagnoses starts

Tashkent, Uzbekistan (UzDaily.com) -- The national movement "Yuksalish" together with the public fund "Ezgu amal" launched the charity marathon "Ezgu amal" ("Good deeds") dedicated to children with cancer diagnosis, which will be held from 11 May to 9 June.

The main task is to provide targeted, targeted financial and social assistance to children with cancer at different stages of treatment, to attract public attention to the issues of early diagnosis and timely treatment of cancer, especially among children. To achieve it, it is important to unite the efforts of state authorities, non-state structures, business and the general public.

As noted, Uzbekistan is making significant efforts to combat cancer. Thus, by the decree of the President of 4 April 2017, the Program for the further development of the oncological service and the improvement of oncological care for the population of the Republic of Uzbekistan for 2017-2021 was approved, the priority directions for the development of the oncological service were determined. The main goal of the measures taken is to increase the duration and improve the quality of life of the population by reducing mortality from cancer.

“Unfortunately, not all points of the program for reforming the system of providing assistance to the population with oncological and hematological diseases have been implemented, there are a number of problems in the oncological service,” says Munira Khojakhanova, chairman of the board of trustees of the Ezguamal background. - Telling the stories of people who have overcome cancer, we raise the acute problem of the need for timely screening and early diagnosis of cancer. This ensures a better prognosis and treatment outcome. Therefore, there is a need for modern diagnostic equipment, available to the general public, and the creation of a unified screening system. In addition, we hope that in Lavender Ribbon Month of Survival Stories, their path to victory will motivate families facing cancer.

The charity marathon includes a series of multi-format events - online broadcasts, press conferences, briefings, round tables, meetings with specialists, representatives of culture and business, master classes, interviews and presentations - for broad information and raising awareness of the population about the need early diagnosis of cancer, public involvement in solving the problems of the oncological service in the country. This will provide an opportunity for expanding charitable activities by attracting new partners.

The end of the marathon will be a charity concert (on 9 June), which will give children the opportunity to fulfill their dream - to perform on stage with the participation of national stars.

On the same day, the National Movement "Yuksalish" and the public foundation "Ezgu amal" signed a memorandum of cooperation.

“In the developed countries of the world, the survival rate of cancer patients is 70–80 percent, and in Uzbekistan, it is three to four times less,” said Bobur Bekmurodov, chairman of the Yuksalish National Movement. - This indicates the presence of systemic problems. In February 2021, President Shavkat Mirziyoyev, at a meeting devoted to discussing the problems of social and economic problems of women, expressed concern about the problems in the field of oncology, the fact that over the past 10-15 years, activities in this direction have been on their own. The charity marathon is one of the items on the roadmap for joint actions with the foundation. We also plan to conduct public monitoring and hearings in the field with the involvement of responsible structures. In addition, we will work on the issue of creating a unified platform for electronic medical records and children's cancer registry for obtaining accurate and actual statistics, organizing targeted funding, planned procurement of pharmaceuticals, reagents, consumables and medical equipment, for analyzing and evaluating treatment methodology.