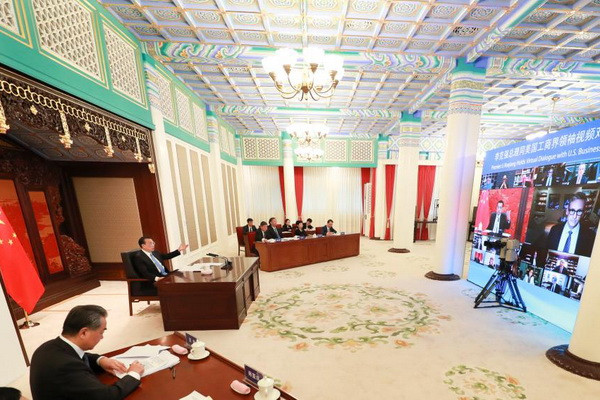 Tashkent, Uzbekistan (UzDaily.com) -- Chinese Premier Li Keqiang said on Tuesday that China welcomes the active participation of companies from the United States and around the world in its reform and opening-up, as well as its modernization process, Xinhua reported.

Li made the remarks during a virtual dialogue with U.S. business leaders, with board chairmen and CEOs from the U.S.-China Business Council and over 20 U.S. multinational companies in attendance.

Promoting the healthy and stable development of China-U.S. relations is the common aspiration of both peoples as well as the international community, Li said.

He called upon the two sides to implement the consensus reached by the two heads of state and uphold the principles of non-conflict, non-confrontation, mutual respect and win-win cooperation, respecting each other’s core interests and major concerns, enhancing dialogue and communication, expanding practical cooperation and properly handling differences.

"The essence of economic and trade relations between China and the U.S. is mutual benefit," said Li, adding that such a relationship benefits the two peoples as well as world peace, stability, development and prosperity.

Noting that trade between the two countries in 2020 increased despite multiple shocks, Li said this indicates that there are objective conditions and opportunities for cooperation between the two sides.

"Problems that occur in cooperation should be resolved through cooperation," said Li, adding that decoupling does no good to either side and will hurt the world.

Li expressed the hope that China and the U.S. can meet each other half-way, promote cooperation by making a bigger pie of common interests and safeguard the safety and stability of the industrial and supply chains.

Li reiterated that championing opening-up is China’s fundamental policy and China’s door to the outside world will open wider.

The premier expounded that by fostering a new development pattern, China will, on the one hand, keep tapping the potential of the domestic market and form a stable support for economic growth and employment, and on the other hand, further open up China’s market and continue to make China an important destination for foreign investment and a big market for the world.

China will further open up, work toward a market-based and law-governed business environment that is up to international standards, and promote reforms to delegate power, streamline administration and optimize government services, ensuring a level playing field for both domestic and foreign enterprises.

Participants from the U.S. side said that avoiding conflict and confrontation and putting bilateral relations back on a constructive track are in the common interests of both sides.

Noting that economic and trade relations are the cornerstone of bilateral ties, they said that decoupling will bring huge uncertainties, not only for the two countries, but also for the whole world.

They said the U.S. business community supports the two sides increasing mutual trust through communication, enhancing coordination and cooperation in areas including epidemic prevention and control, climate change, sustainable development and innovation, and resuming people-to-people exchanges as soon as possible.

They said that U.S. companies welcome progress made by China in the areas of opening-up and optimizing the business environment, feel optimistic about China’s development prospects and opportunities, and are committed to the long-term trade and investment cooperation with China.`