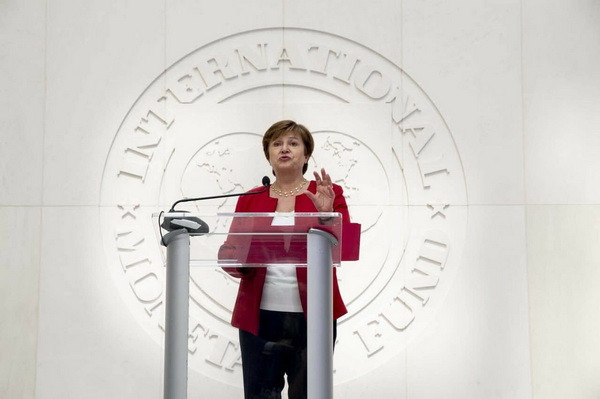 "The good news is that there is light at the end of the tunnel. After the worst global recession since the second world war, the recovery is underway," Georgieva said in her opening remarks at a virtual press conference during the IMF/World Bank Spring Meetings.

And yet, while there is light, the crisis continues to cast a dark shadow, Georgieva said.

"Economic fortunes are diverging dangerously. A small number of economies, led by the U.S. and China, are powering ahead - while poorer countries are falling behind in this multi-speed recovery," Georgieva said.

"We also face extremely high uncertainty, especially over the impact of new virus strains and potential shifts in financial conditions," she continued, adding that there is the risk of further economic scarring.

As the IMF releases its Global Policy Agenda, Georgieva highlighted three priorities, the first which being a fair shot at the vaccine.

Noting that vaccine policy is economic policy, the IMF chief said faster progress in ending the health crisis could add almost 9 trillion dollars to global GDP by 2025, while adding that this window of opportunity is closing fast.

"Governments must show the same sense of urgency and collaboration to provide vaccines to everyone - everywhere," she said.

In order to give everyone a fair shot in recovery, Georgieva said policymakers should support vulnerable households and viable firms amid the crisis, adopt targeted fiscal measures and maintain favorable financial conditions.

Once the health crisis is over, she said, governments should gradually scale back support programs - while scaling up targeted hiring subsidies and retraining and reskilling, which is particularly important for young people and women, who have suffered more in the crisis.

Looking ahead, the focus should be on scaling up public investment - in green projects and digital infrastructure, in people’s health and education - to ensure that everyone can benefit from the historic transformation to greener, smarter, and more inclusive economies, she said.

Countries will need sufficient public revenues and more efficient spending, said the IMF chief. In many cases, this will mean more progressive taxation, and international agreement on questions like minimum taxation for companies, she added.

The IMF has so far supported 86 countries with over 110 billion dollars, using a variety of instruments. It has also supported 160 countries through technical assistance and training.

The multilateral institution will propose a new Special Drawing Rights (SDR) allocation of 650 billion dollars. "This will help address the long-term global need for reserve assets and provide a substantial liquidity boost to all our members, especially the most vulnerable," Georgieva said.