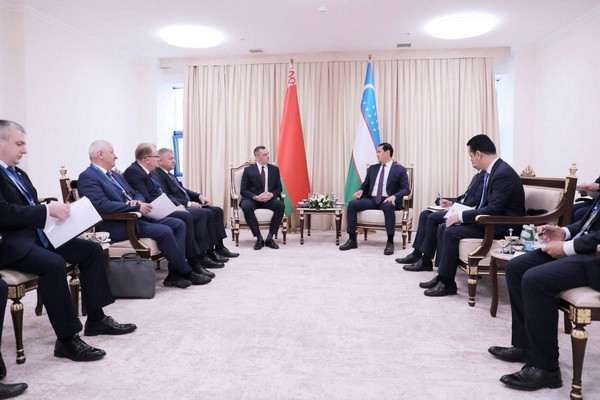 Issues of multifaceted cooperation between Uzbekistan and Belarus discussed

Issues of multifaceted cooperation between Uzbekistan and Belarus discussed

During the meeting, the sides discussed the current agenda of the Uzbek-Belarusian partnership in a wide range of areas, as well as the implementation of the agreements reached and the current state of preparation for the upcoming events.

It was noted that the priority area of bilateral cooperation for the governments of both countries is the dynamic development of trade, economic and investment cooperation based on the complementarity of the economies of the two states. The parties welcomed the ongoing work in this direction and expressed their readiness to intensify it, aiming to increase the portfolio of mutually beneficial investment projects in such promising areas as agriculture, animal husbandry, mechanical engineering, pharmaceutical and food industries, healthcare and education.

In this context, special attention was paid to the prospects for the development of industrial cooperation, taking into account the successful experience gained by Belarusian companies that have already implemented joint projects and are currently carrying out production activities in Uzbekistan. Constructive proposals were considered to improve the efficiency of industrial cooperation by increasing the localization of production in the Republic by mastering the production of components and spare parts for manufactured products. Further steps were also agreed to promote the approved joint projects and develop new project proposals in the field of animal husbandry, pharmaceuticals, instrument making, electrical engineering, textile, leather and footwear industries.

They also discussed measures to increase the Uzbek-Belarusian trade turnover - the parties confirmed their mutual commitment to consistent interaction to bring the volume of mutual trade to $ 500 million in the near future. In this context, an agreement was reached on a joint study of opportunities for establishing cooperation between Uzbek and Belarusian companies in order to conclude new mutually beneficial trade agreements, as well as to intensify partnerships in the field of standardization and certification to facilitate access of Uzbek and Belarusian goods to the markets of the two countries.

The dialogue also touched upon the issues of cooperation in the field of transport and transit - the parties considered the possibilities for increasing the frequency of flights, strengthening bilateral cooperation in the field of international cargo transportation and optimizing customs control mechanisms in the implementation of logistics operations in the territories of the two countries. An agreement was reached on close cooperation to work out mutually acceptable solutions on all issues in this area.

The parties agreed to maintain a regular dialogue to discuss and ensure the implementation of existing agreements and promote joint projects and initiatives.