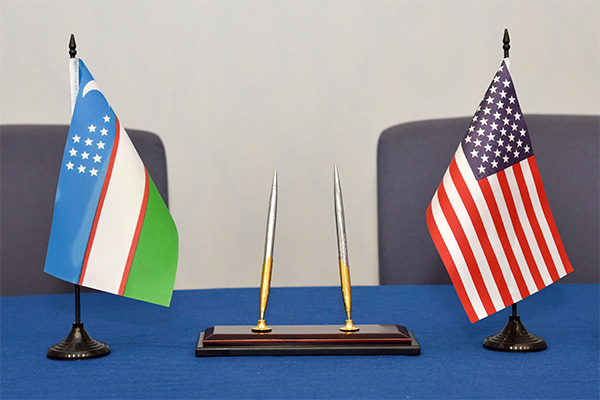 Tashkent, Uzbekistan (UzDaily.com) -- Ambassador of Uzbekistan Javlon Vakhabov and the head of the US National Guard bureau, General Daniel Hockenson, held talks to discuss prospects for cooperation between the national guards of the two countries, the Dunyo news agency reported.

The American side was informed that the National Guard of Uzbekistan was created in August 2017 in accordance with a presidential decree and is part of the country’s Armed Forces. It was noted that this department performs the functions of ensuring public safety during mass events, protecting state, especially important and other facilities, including diplomatic, consular missions of foreign states, as well as international organizations. In addition, it was emphasized that the military personnel of the National Guard of Uzbekistan participate in ensuring the territorial integrity and defense of the country, preventing acts of terrorism and extremism, and also assist in eliminating the consequences of natural and man-made emergencies.

It was especially emphasized that in order to further strengthen practical ties of mutually beneficial cooperation with foreign countries, study their experience in responding to modern challenges and threats, the National Guard of Uzbekistan regularly holds meetings, trainings and exercises with foreign partners. For example, only in February, negotiations were held with military representatives of South Korea, Italy, Great Britain, Russia, Turkey, as well as joint trainings with American military personnel.

In turn, General Daniel Hockenson said that the National Guard is the oldest paramilitary force in the United States, which was formed in 1636. As the American general noted, annually about 60 thousand people enter the service in this department, who undergo preparatory courses in the troops, as well as trainings and exercises. According to the general, when a mobilization or state of emergency is declared in the country, units of the National Guard are included in the country’s regular troops. Currently, the governors of all regions of the United States have attracted about 42 thousand National Guard troops to fight COVID-19. They assist local authorities not only with the delivery of medicines and food, but also with the testing and vaccination of the US population.

Daniel Hockenson welcomed the progressive expansion of partnerships between the Mississippi National Guard and the Uzbek Ministry of Defense, which, he said, have become an exemplary example for cooperation.

As the American military leader noted, the partnership between Uzbekistan and the Mississippi, established in 2012 after the Pentagon of the National Guard of this state was designated as a partner of the Ministry of Defense of Uzbekistan, today is characterized by high dynamics of multifaceted interaction.

General Jenson Boyles, the commander of the Mississippi National Guard, who participated in the negotiations, noted that in September 2018, he and the congressman from the region, Trent Kelly, were honored to be received by the head of Uzbekistan. According to Jenson Boyles, it was this meeting that laid the foundation for bringing Uzbek-Mississippi relations to a more intensive level, not limited to purely military ties. Since then, as the commander of the National Guard stated, the visits of members of the Government of Uzbekistan to Mississippi took place, Governor of the State of the United States Philip Bryant became the first head of the US region to visit the republic, sister-city relations have been established between the cities of Clinton and Zarafshan, as well as academic cooperation of the State University of Mississippi and the University of Alcorn with Tashkent State Agrarian University and Tashkent Institute of Irrigation Engineers and Agricultural Mechanization.

According to the Embassy, following negotiations with the head of the US National Guard Bureau, General Daniel Hockenson, an agreement was reached on organizing a visit of a delegation of the National Guard of Uzbekistan to the United States, as well as the participation of our representatives in the annual South Strike trainings in Mississippi.