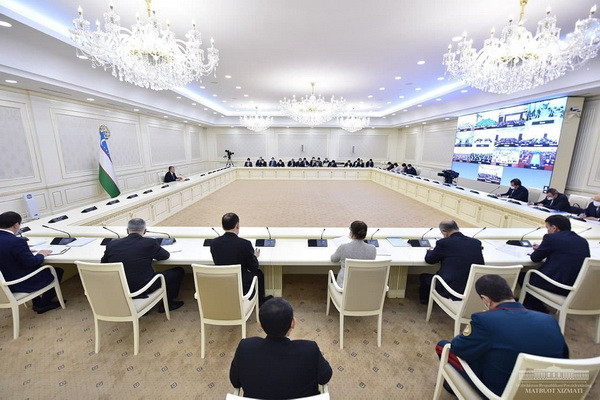 President: Sharp increase in crop yields and rational use of water should be a priority in agriculture

President: Sharp increase in crop yields and rational use of water should be a priority in agriculture

Tashkent, Uzbekistan (UzDaily.com) -- Under the chairmanship of President of Uzbekistan Shavkat Mirziyoyev, a video conference was held on 24 February to discuss the priority tasks of agriculture and water management for the current year.

Agriculture is one of the main sources of increasing the country’s export potential, increasing jobs and income. Therefore, many documents have been adopted in this area, the necessary conditions have been created. Mechanisms for financial support for the development of horticulture, viticulture, vegetable growing, rice growing, animal husbandry, agricultural enterprises, and the introduction of water-saving technologies have been established.

The state has set a goal to bring income from each hectare to US$5,000 this year through rational placement and scientifically based cultivation of crops.

“A sharp increase in the profitability of crops and the rational use of water should become priority tasks in the field,” the head of state noted.

It was noted that for this it is necessary to place crops taking into account the specifics of each region, historically established forms and methods of farming, based on the possibilities of water supply. For example, in some farms in Mirzaabad district, cotton yield is 12 centners per hectare. However, when studying the specialization of local makhallas, the profitability of growing and processing pomegranates was revealed.

Likewise, wine grapes can be grown in Farish and districts regions. In Bulakbashi district, there is an opportunity to receive a good income from garlic, to grow a thousand tons of export-oriented grapes a year through the allocation of concessional loans to households.

- From 1 March, the term of loans allocated under family business programs for gardens, vineyards and greenhouses will be increased from 3 to 7 years, and the grace period - from 1 to 3 years. This is the desire of people, the opportunity for change, - said Shavkat Mirziyoyev.

The importance of putting rainfed and pasture lands into circulation for the creation of permanent and seasonal jobs was emphasized.

As you know, in accordance with the tasks aimed at providing youth employment, unemployed citizens are provided with 10 to 50 acres of land. Responsible persons were instructed to allocate land near the places of residence of the population and help with the supply of seeds, fertilizers and equipment.

It was noted at the meeting that this year it is necessary to provide agricultural enterprises with 702 thousand tons of seeds and 105 million seedlings.

However, the lack of a system in this area creates difficulties for both the population and exporters. The quality of the varieties, the maturation of the products do not allow them to occupy a leading position in foreign markets.

In this regard, the Mirzaev Scientific Research Institute of Horticulture, Viticulture and Winemaking of the National Center for Agricultural Knowledge and Innovation and its research and experimental stations will organize the procurement of high-yielding export-oriented fruit and grape seedlings on the basis of a public-private partnership. For this purpose, in each region, in accordance with the soil and climatic conditions, intensive nurseries will be created on an area of at least 100 hectares. When buying seeds and seedlings from local seed farms, up to 20 percent of its value will be compensated by the state.

In addition, a procedure will be introduced to reimburse part of the cost of building lemon greenhouses using energy from alternative sources.

The meeting also touched upon the activities of the cotton and textile cluster.

- A cluster is a search, an innovation. If the clusters work with a vision of tomorrow, it will be able to bring products with high added value to the market and be competitive. It is necessary to study world experience, increase production and reduce costs, the President said.

The head of state, always setting a task, first of all decides the issue of financing. This year, 24 trillion soums are allocated to the Agriculture Fund for the stable provision of the agricultural sector with financial resources. At the same time, for the first time, it is envisaged to allocate 300 billion soums to issue loans for growing vegetables at the base rate of the Central Bank.

Additional resources are required for lending to grain and cotton growing, cotton-textile clusters and cooperatives.

In this regard, today the President signed a decree on improving the activities of the Agriculture Fund and the system of state financial support for producers. At the meeting, the essence and significance, the implementation of this document were discussed.

The post of Deputy Minister of Agriculture for the Development of Information Technologies is being introduced and a separate structure is being created. This structure was instructed to create by the end of the year an information system that will monitor 3 million hectares of irrigated land, with a database on soil composition and crops. For these purposes, US$10 million of funds from international financial institutions will be directed.

At the same time, the task was set to create an Agricultural Services Center in the Yukorichirchik district of the Tashkent region.

Issues of economical use of water were also discussed at the meeting.

During the irrigation season this year, water supply is expected to be 25 percent less than normal. Therefore, avoiding wasteful use of water is a vital necessity.

In particular, it is indicated that it is possible to save 3 billion cubic meters of water through the introduction of water-saving technologies on 430 thousand hectares.

This, in turn, increases the demand for water-saving technologies and equipment. According to preliminary estimates, in February-April this year 35-40 thousand tons of polyethylene will be required for the production of drip irrigation systems and pipes. In this regard, the duty on the import of polyethylene and polypropylene required for water-saving technologies has been canceled for a period until 1 October.

The Ministry of Water Resources was instructed to repair and upgrade 3,000 pumps, as well as introduce an online monitoring system for electricity and water consumption at pumping stations.

The meeting also touched on measures to develop livestock, poultry and fish farming.

It was noted that from 1 July, livestock, poultry, rabbit and fish farms that do not have value added tax arrears will receive subsidies for their products.

In addition, livestock enterprises will be provided with a number of benefits when importing raw materials and technologies. A procedure for insurance against mortality in fish farming and poultry farming will be developed.

In animal husbandry, the issue of feed supply is of current importance. It is planned to allocate newly developed land for livestock complexes, to grow fodder crops on 28 thousand hectares of rainfed and pastures, as well as on 173 thousand hectares of land freed from basic crops.

Attention was also paid to the training of qualified personnel in the areas of agriculture.