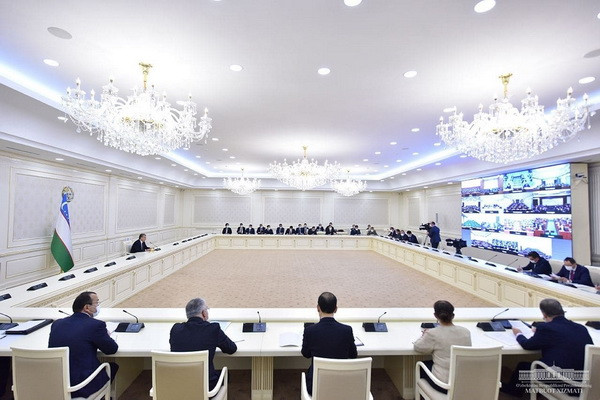 Tashkent, Uzbekistan (UzDaily.com) -- President Shavkat Mirziyoyev chairs a videoconference on the effectiveness of measures taken to support entrepreneurship in the regions and further tasks for development of the service sector.

As is known, at the beginning of the year, khokims of the regions, districts and cities addressed people and outlined specific plans for development of entrepreneurship. Despite the difficult situation that has arisen this year, all the necessary conditions have been created for their implementation, and sufficient resources have been allocated to support business.

The activities of khokims and sector managers on the main task assigned to them, namely, creating new jobs and removing low-income families from the “iron notebook” was considered at the meeting.

12 thousand permanent jobs were created in Syrdarya region in 10 months. About 90 percent of unemployed, included in the “iron notebook”, were employed as a result.

Job creation indicators were recognized as successful in Kashkadarya region’s Karshi and Kitab districts, and Navoi region’s Kyzyltepa, Uchkuduk, Navbakhor districts and Zarafshan city. But, the activities in this direction are considered unsatisfactory in a number of districts.

“Each region has large resources for development of entrepreneurship. The only thing we have to do is use them. Local leaders should think and work on this issue every day”, the Head of the state noted.

At the beginning of the year, it was planned to allocate 4 trillion UZS to finance family entrepreneurship programs. However, thanks to additional funds allocated during the year, preferential loans were provided to the population and entrepreneurs totaling 5.2 trillion UZS.

The effectiveness of these funds was also considered. For example, in Shavat district, 26 billion UZS of loans were allocated to families, as a result, 1.5 thousand jobs were created. In other words, there are 56 jobs for every billion UZS.

It was emphasized that the entrepreneurs need credit funds in the amount of 1 trillion UZS to implement new projects. In this regard, the Ministry of Finance was instructed to allocate 1 trillion UZS raised through issuing Eurobonds in People’s Bank, Microcreditbank and Agrobank as resources for family business programs.

People’s Bank was instructed to prepare projects on women’s entrepreneurship and train women in business management. It was noted that the Bank’s employees should directly help prospective women entrepreneurs, including by examining the situation at places.

Activities on stimulating active entrepreneurship in Yazyavan, Uchtepa, Shafirkan and Bekabad districts was criticized. The Ministry of Economic Development and Poverty Reduction was charged with creating a business patronage system to provide comprehensive assistance to entrepreneurs in such backward districts.

It was noted that 96 thousand enterprises that had to suspend work during the pandemic have already resumed their activities. The importance of assistance in the recovery of other business entities was noted.

It was emphasized that entrepreneurs in the regions face the problem of access to land resources, this issue is raised in many appeals.

The issue of dismissing khokims of Bukhara, Jandar and Syrdarya districts who did not properly organize work on creating jobs, solving problems and supporting entrepreneurs was raised.

The importance of discussing reports of khokims on development of entrepreneurship at the meetings of local councils with subsequent assessment of their activities, determining specific plans for 2021 was noted.