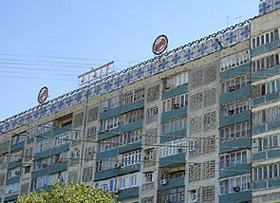 Families of four in this Central Asian country, which borders Afghanistan and once was part of the Soviet Union, share a 600 to 700-square-foot space, compared to the 1,000-square-foot 2-bedroom apartments some American couples have.

"Regardless of the size -- one-bedroom, three-bedroom -- there is one bathroom," Uzbekistani resident Rakhima Ortikova, who supports housing reform in the country, said through a Russian translator.

And residents in one building split the utility bills evenly instead of paying for their own usage, said Elizabeth Balint, project manager for the U.S. Agency for International Development World Learning Community Connections Program.

Those are significant differences from the multiple bathrooms Americans enjoy and the meters that monitor their utility usage and help calculate their bills, Balint said.

That’s one of the reasons USAID brought the delegates to Port Clinton and Fremont on Monday. They wanted to learn more about American housing and get ideas for their condo and apartment units back home.

The group spent the morning in Fremont learning how WSOS Community Action helps local residents with housing and what other programs it has available. Delegates were very interested in learning about American’s use of wind and solar power, Balint said.

Then they toured the Port Clinton Pointe affordable housing apartment complex in the afternoon.

The complex, which opened a year ago, features two and three-bedroom apartments with Energy Star appliances, a clubhouse, exercise room and laundry room and in-apartment washer and dryer hookups. Delegates toured both types of apartments and took pictures of the bathrooms, walk-in closets, heating and cooling units and the exterior of the building.

They asked questions about how the project was funded -- with a tax incentive -- and what utilities the lease included -- water -- and whether affordable housing was the most profitable business in the United States -- no.

"Honestly, it’s very difficult," said Stephen Chappuies, senior project manager for American Preservation Builders LLC of Valley View, which built Port Clinton Pointe. "You need to be very conservative when you take on this kind of endeavor because any mistake costs money."

Chappuies said the goal was to create a community instead of just an apartment complex. It gives people with moderate incomes an affordable and very nice place to live, said Chappuies and Rita Mooney, marketing director for Millennia Housing Management, which runs the complex.

"They saw beautiful housing," said Svitlana Mefford, a Russian translator who interpreted the group’s comments. "They obviously like that."

Bozor Kholiyarov, Karshi City Housing Association chairman, said he would like to see the complex be available for residents to buy apartments instead of just renting. In Uzbekistan, residents often have the option to buy their condos or apartments, the delegates said.

Ortikova said she liked that the complex offered people with lower incomes a good place to live.

"It’s probably a motivation for those families to live better and do everything they can to have a better life," she said.