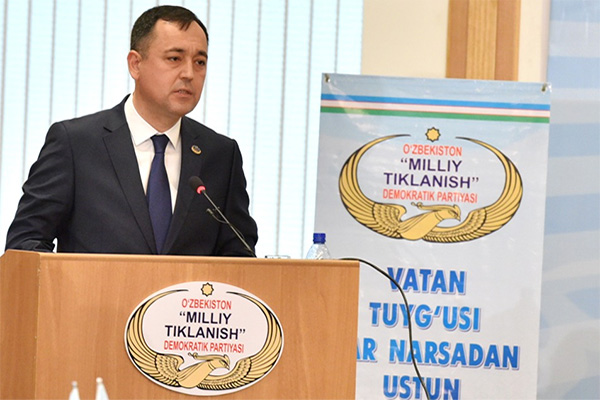 Tashkent, Uzbekistan (UzDaily.com) -- The candidate for President of the Republic of Uzbekistan from the Milliy Tiklanish Democratic Party of Uzbekistan, Sarvar Otamuratov, met voters of Qashqadaryo Region on 15 November.

The meeting, which was held in the format of video conference, was opened by the leader of Milliy Tiklanish Democratic Party deputies’ group in the Qashqadaryo Regional council of people’s deputies, A.Keldiyev.

S.Mahmatmuminov, authorised representative of the candidate, familiarized those gathered with the candidate’s biography.

Candidate for President of the Republic of Uzbekistan Sarvar Otamuratov made a speech expounding the main points of his electoral programme.

The programme gives priority significance to issues of ensuring the consistent continuation of the strengthening of the high law culture and political culture in society and achieving a spiritual revival on the basis of the country’s great historical and cultural heritage, rich spiritual-moral values and traditions, based on five principles of reforms which are widely recognized on an international scale and which have become guidance for action for the development of the country.

The aims and tasks specified in the programme are of important significance to the socio-economic development of all the regions of the country, including Qashqadaryo Region. This region accounts for 64 per cent of natural gas, 67 per cent of oil and 87.4 per cent of gas condensate extracted in the country. Such modern industrial enterprises working in the region as the Shortan gas-chemical complex, the Muborakneftgaz unitary enterprise, the Dehkanabad potassium fertilizer plant and the Tolimarjon thermal power station as well as big joint ventures, Gissarneftegaz, Kukdumalokgaz and Shortangazmahsulot are making a worthy contribution to the development of the country’s economy and to the raising of the population’s wellbeing.

The candidate drew voters’ attention to issues of the further development of the region’s economy, the expansion of its export-oriented production sector, the increasing of the volume and types of goods for export, the introduction of modern technologies at textile enterprises for the deep processing of local raw materials, the creation of new ways of access to the world market and the construction of transport links between Uzbekistan and other countries and regions.

The candidate’s programme proposes tasks of raising the effectiveness of the work of state companies and predominantly state-owned enterprises by ensuring the openness of their financial-economic activities, cardinally strengthening the system of training engineers and technicians, financial experts, economists and managers in the area of corporate management and programmers with modern knowledge and qualifications as well as by supporting talented young people in these areas.

The chairperson of a department of the Karshi engineering-economics institute, Yu.Ergasheva; a senior teacher of the Karshi engineering-economics institute, S.Murtozova; an editor of a section of the Voha newspaper, O.Kuldoshev; the chief trainer of the Qashqadaryo regional department of the Uzbek martial art federation, J.Bobonazarov; and others expressed their opinions on the electoral programme of the candidate and tasks proposed in it. They called on voters to take an active part in the forthcoming 4 December 2016 elections of President of the Republic of Uzbekistan.