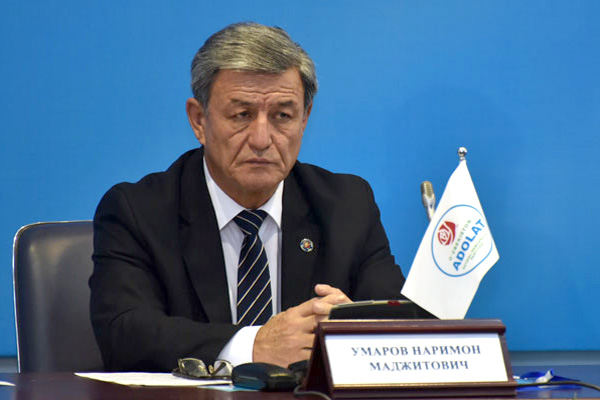 Tashkent, Uzbekistan (UzDaily.com) -- The candidate for President of the Republic of Uzbekistan from the Adolat Social Democratic Party of Uzbekistan, Narimon Umarov, met voters of Sirdaryo Region on 14 November.

The meeting, which took place in the format of video conference, was opened by the leader of Adolat Social Democratic Party deputies’ group in the Sirdaryo regional council of people’s deputies, S.Elmurodov.

Yu.Usmonova, authorised representative of the candidate for President, familiarized those gathered with his biography.

Candidate for President of the Republic of Uzbekistan Narimon Umarov made a speech expounding his electoral programme.

He noted that as a result of large-scale reforms implemented in the years of independence, Sirdaryo Region’s socio-economic potential had risen, that the share of industry in the gross regional product was increasing and that the population’s wellbeing was rising with every passing year.

In the candidate’s electoral programme, the following issues are given priority significance: the building of a fair democratic state and strong civil society, the ensuring of the supremacy of law, the further strengthening macro-economic stability, the reinforcement of citizen’s social security and the modernization and diversification of the economy.

Special attention is paid in the programme to such tasks as more local production of goods, developing the export-oriented economy, increasing the competitiveness of locally-produced goods on world and regional markets and keeping the balance between export and import. The effective use of untapped possibilities for the active attraction of peoples’ spare money and the available funds of small business and entrepreneurial entities to the banking sector will make it possible to channel additional investment and financial resources into the development of the economy, the candidate’s programme notes.

The candidate also put forward proposals to resolve ecological issues, including tackling problems that are typical of Sirdaryo Region and that relate to difficult natural conditions, close groundwater occurrence and high soil salinity.

At the meeting, a deputy of the Legislative Chamber of Oliy Majlis (parliament) of the Republic of Uzbekistan, U.Holov; the chief of a department of Gulistan state university, R.Mahmudov; the chairperson of the Sirdaryo regional council of the Adolat Social-Democratic Party; D.Abdullayeva; the chief doctor of the Khavat unified railways hospital, G.Rayimnazarov; a teacher of the Gulistan vocational college of pre-schoool education and services, D.Umrzoqova; and others expressed their opinions on the electoral programme of the candidate. They called on voters to take an active part in the forthcoming 4 December 2016 elections of President of the Republic of Uzbekistan.