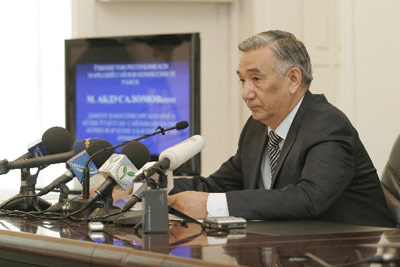 Tashkent, Uzbekistan (UzDaily.com) -- The presidential election campaign in Uzbekistan is in progress in complete accordance with the country’s legislation, chairperson of the Central Election Commission (CEC) of Uzbekistan Mirza-Ulugbek Abdusalomov said in an interview with UzA news agency.

“The presidential election in Uzbekistan is an extremely important public and political event, particularly at the current stage of our country’s development. The future of the Motherland, its further prosperity depend on the activity, political maturity of all participants in the election and finally the choice the voters will make,” the CEC head said.

"The election campaign, including canvassing, is underway in full compliance with the legislation of our country and the CEC-endorsed Program of main events to prepare and conduct the presidential election in the Republic of Uzbekistan," he said.

In general, information about the pace of the election campaign is being published in the country’s media in 17 languages, he said.

The CEC head recalled that the observers from the political parties which nominated their presidential candidates, media representatives, observers from other countries, international organizations and movements are entitled to take part in all events to prepare and conduct elections, and to attend the premises for voting on election day and during the vote count.

The Organization for Security and Co-operation in Europe Office for Democratic Institutions and Human Rights (OSCE ODIHR), Commonwealth of Independent States Executive Committee (CIS EC), Shanghai Cooperation Organization (SCO), Association of World Election Bodies (A-WEB) and other authoritative international bodies will be involved in the election monitoring at the CEC’s invitation, Abdusalomov said.