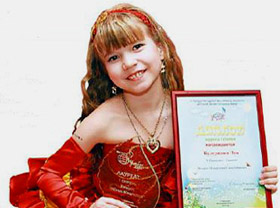 Tashkent, Uzbekistan (UzDaily.com) -- Leya Bulgakova, a laureate of Yangi avlod-2007 Children’s Creativity Festival, has emerged as the winner of the 7th International Children’s Song Contest “Smile of the World”, held on 8-12 April in Odintsovo city (Russia).

Around 200 young performers aged 5-16 from nine countries participated in the contest. The festival is held with the support of Russia’s Ministry of Foreign Affairs and the Administration of Odintsovo district.

Leya Bulgakova, who was one of the winners of Yangi avlod Festival in 2007 with her song the Orange Sun, has become the first performer from Uzbekistan to participate in the Smile of the World. Having successfully passed two rounds, she has won 1st place in the age category of 5-8.

The Smile of the World Festival has been given the goal of helping develop children’s creativity, discovering and supporting young talents, fostering love for music, attracting state bodies’ and media attention as well as general public to problems existing in children’s music education as a whole.

The first festival was held on April 25, 2004 and brought together 65 performers from across Russia. The latest festival featured 2,000 children from Russia, Ukraine, Belarus, Moldova, Kazakhstan, Estonia, Romania, USA, and Denmark.

The festival jury was chaired by Yevgeniy Krylatov, a people’s artist of Russia and composer and included an honourable member Chen Kir Veniemn, editor-consultant of Junior Eurovision Song Contest. Other jury members include leading music teachers, musicians, and organizers of shows, contests and festivals.