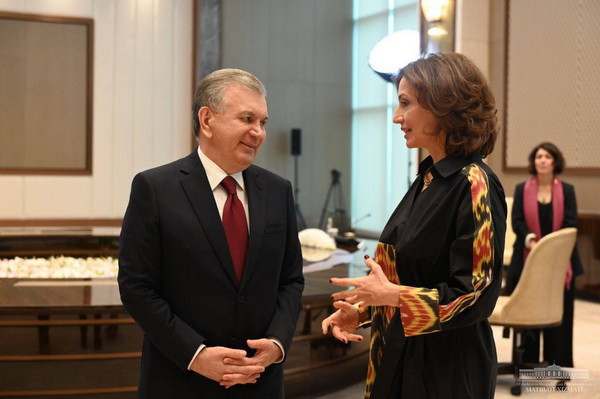 Tashkent, Uzbekistan (UzDaily.com) -- On 15 November, as part of the World Conference on Early Childhood Care and Education held in Tashkent, President of the Republic of Uzbekistan Shavkat Mirziyoyev met with the Director-General of the United Nations Educational, Scientific and Cultural Organization (UNESCO) Audrey Azoulay.

The practical aspects of expanding the constructive and productive interaction of Uzbekistan with this authoritative institution of the UN system were discussed.

The current level of fruitful partnership was noted with satisfaction. Joint programs and projects are being implemented in accordance with the Country Program and the adopted roadmap.

Uzbekistan has been elected a member of the International Committee for the Protection of the Intangible Cultural Heritage for the first time. The art of "Bakhshi" and the dance "Lazgi" are included in the list of intangible cultural heritage.

The International Advisory Committee on the Protection of Historical Heritage Sites in Uzbekistan and the Khiva Process on regional humanitarian cooperation have been launched.

UNESCO is also providing technical assistance for the development of a vocational education system in rural areas of the country.

In addition, joint events are regularly held in priority areas of cooperation.

During the meeting, General Director Audrey Azoulay highly appreciated and noted as the most successful in international comparison the ongoing reforms in Uzbekistan in the field of youth support, upbringing and education of children.

Particular attention was paid to the practical implementation of the new Country Programme. An agreement was reached on the opening of a regional UNESCO Center in Tashkent, as well as the preparation and adoption of an updated road map to promote joint initiatives and breakthrough projects of fruitful cooperation.