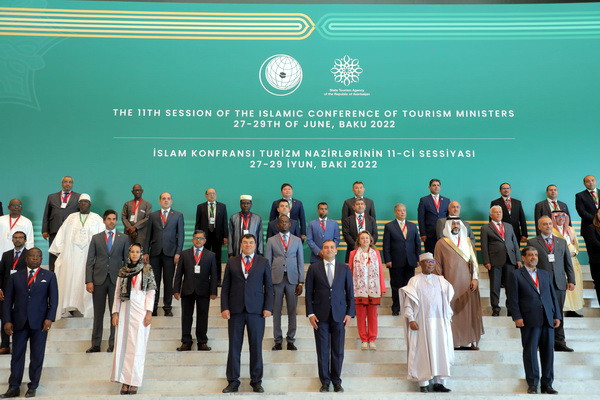 A delegation of Uzbekistan takes plarts in the conference of OIC

A delegation of Uzbekistan takes plarts in the conference of OIC

Tashkent, Uzbekistan (UzDaily.com) -- A delegation led by Deputy Prime Minister - Minister of Tourism and Cultural Heritage Aziz Abdukhakimov took part in the XI session of the Conference of the Organization of Islamic Cooperation in Baku.

As part of the event, the delegation of Uzbekistan took part in bilateral negotiations with the Secretary-General of the OIC and delegations of leaders of a number of foreign countries.

In particular, Aziz Abdukhakimov met with the administrations of the tourism industry of Azerbaijan, Malaysia, Bangladesh, Iran, Turkey, Uganda and reached a number of agreements.

OIC Secretary General Hissein Brahim Taha highly appreciated the reforms of Uzbekistan in the field of tourism, the importance of such cities as Bukhara, Samarkand, Khiva for the Islamic world.

He fully supported the choice of Khiva as a tourist city of the OIC and the tourist capital of the Islamic world. The Secretary-General also supported the initiative to conduct joint research at the Silk Road International University of Tourism and Cultural Heritage in Samarkand, study Halal standards and certification, expand transport and logistics links in the OIC region and study the latest practices in the development of Islamic tourism.

Taking into account the implementation of the Road Map project, the main attention was paid to the new intergovernmental agreement on cooperation, which envisages the expansion of tourist flows, signed between Uzbekistan and Azerbaijan during a visit to Uzbekistan in June 2022 with the chairman of the State Tourism Agency of Azerbaijan Fuad Nagiyev.

At a bilateral meeting with the Minister of Tourism, Arts and Culture of Malaysia, Dato Shri Nancy Shukri, it was noted that cooperation between our countries in the field of tourism and cultural heritage has expanded significantly in recent years.

The Minister of Malaysia noted that Uzbekistan has a great potential that has not yet been used, and highly appreciated the work on the development of pilgrimage tourism under the leadership of the President of our country. The parties reached agreements on increasing air travel between the two countries, organizing B2B meetings with travel companies.

The Minister of Civil Aviation and Tourism of Bangladesh Mahbub Ali expressed his opinion about the great interest of the inhabitants of his country in visiting Uzbekistan, especially Islamic shrines located on the territory of the republic, the rich history and cultural heritage of the Uzbek people.

During the bilateral meeting, the Minister of Cultural Heritage, Tourism and Crafts of the Islamic Republic of Iran, Syed Ezzatollah Zarghami, noted that Uzbekistan has a huge tourism potential and called for the intensification of relations in the field of tourism and the implementation of joint projects, in particular, a special land route Iran-Turkmenistan-Uzbekistan- Tajikistan.

Following the talks, the parties agreed to deepen cooperation and exchange of experience in the field of restoration of historical monuments and send Iranian experts in this field to Uzbekistan, organize joint press tours, plein airs, exhibitions and photo exhibitions.

Mahmud Erol Kilic, head of the Center for the Study of Islamic History, Art and Culture (IRCICA), noted during a meeting with Aziz Abdukhakimov that "Uzbekistan is a country that has become one of the centers of Islamic culture."

He welcomed the decision of the President of Uzbekistan to restore the status of the "Friday Mosque" in Ichan-Kala, saying that this is a historic decision for the entire Islamic world, and noted that it can be compared with the decision to restore the status of the Ayasofya Mosque in Istanbul. The parties also discussed joint plein airs, photo and art exhibitions, projects in the field of calligraphy and miniature art.

The leadership of IRCICA supported the initiatives and proposals of the Uzbek side, expressed readiness for their joint implementation.

An agreement was reached with Deputy Minister of Culture and Tourism of Turkey Ozgul Ozkan Yavuz on further expanding cooperation in the fields of tourism, culture and art, archeology, restoration and management of cultural heritage sites, establishing links between archives and libraries, as well as enhancing cultural exchange.

During bilateral negotiations with the Minister of Tourism, Wildlife and Ancient Heritage of Uganda, Martin Mugarra Bahinduka, issues such as the development of cooperation between countries in the field of tourism, exchange of experience were discussed.