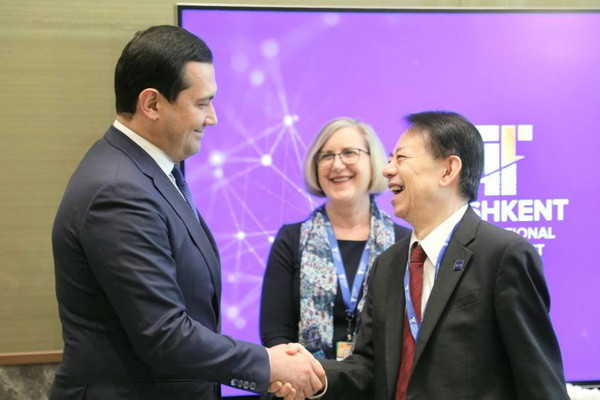 Tashkent, Uzbekistan (UzDaily.com) -- On the sidelines of the Tashkent International Investment Forum, Deputy Prime Minister - Minister of Investment and Foreign Trade of the Republic of Uzbekistan Sardor Umurzakov met with the President of the Asian Development Bank (ADB) Masatsugu Asakawa.

During the dialogue, the parties discussed the agenda of bilateral cooperation, the implementation of joint projects, measures to accelerate them, as well as new areas for expanding cooperation.

The head of the Bank highly appreciated the level of the Forum, noting its importance for stimulating investment activity in the country, as well as developing economic ties with partner countries.

He also welcomed the holding of the “Country Platform” for Uzbekistan on the sidelines of the Forum, while expressing readiness to provide support in improving the effectiveness of its activities in coordinating interaction with donors and development partners in terms of implementing joint projects.

In a separate order, the parties discussed the prospects for intensifying cooperation in the field of supporting women’s entrepreneurship. The head of the ADB expressed his readiness to assist in joining Uzbekistan to the We-Fi women’s entrepreneurship development program, which was created to expand access to financial resources of companies led by women. The prospects for expanding credit lines to support women in business provided by the ADB to commercial banks in Uzbekistan were also considered.

In addition, the parties discussed issues of cooperation to increase the number of public-private partnership projects in such areas as electricity distribution, construction and modernization of water supply systems, healthcare and transport.

The health sector took a special place on the agenda of the negotiations - the prospects for attracting ADB to develop a national strategy for the development of the health sector in Uzbekistan were considered.

As a result of the meeting, an agreement was reached to maintain a constant dialogue on active and promote new areas of cooperation.