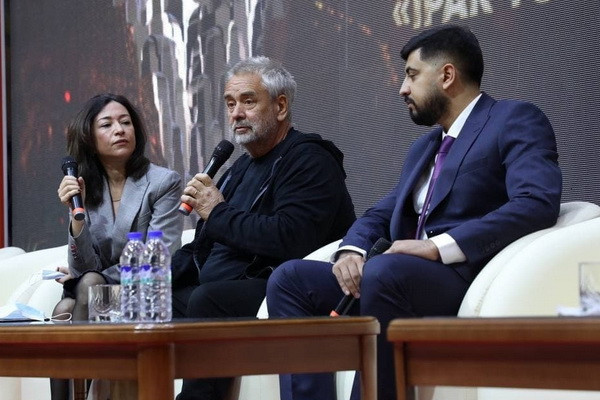 Tashkent, Uzbekistan (UzDaily.com) - Today, on 2 October, within the framework of the Tashkent International Film Festival, a press conference was held with the famous French director Luc Besson. At the meeting, the director shared his memories of how he created his films and gave advice to young filmmakers.

At the meeting, the director shared his memories of how he created his films and gave advice to young filmmakers.

- I am very glad to be present at the Tashkent International Film Festival and I want to say that the festival is primarily for young people. We must empower young filmmakers to take the initiative in filmmaking into their own hands. I remember when I just started making my films, I could only show the final result to my parents, because there was no way to show it to famous filmmakers for evaluation.

Now, anyone can shoot a short film, edit it and upload it to the Internet, thereby broadcasting it to the world. And I think that young people are very lucky, because now any opportunities are open for them, - said Luc Besson.

- The best advice I can give is to be honest with yourself. Do what comes from the heart, from the soul. That’s when people will like your work. If you know your story is good enough, don’t give up. You have no idea how many rejections I received in due time. Your film should reflect who you are. After all, those emotions that are shown on the screen are real, - said Besson.

The French director also expressed his opinion about the Uzbek cinema.

- Uzbekistan is an incredible country. And I believe that films of Uzbek cinema deserve a place at the Cannes Film Festival. I really hope to see them there someday.