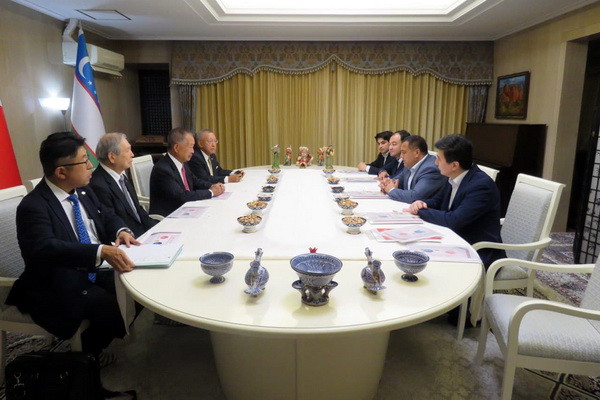 Tashkent, Uzbekistan (UzDaily.com) -- The Embassy of the Republic of Uzbekistan in Tokyo held negotiations with the Director General of AOIKAI Medical Corporation Takayoshi Shintani, as well as the management of Fairness Law Firm Naoya Endo, Biosystems Co. Ltd Isao Yoshida and Hiroshi Tamae.

AOIKAI Medical Corporation was founded in 1978, includes 15 companies and has a staff of 15,200 employees. The main activity of the medical corporation is the provision of high-level medical services, combining "treatment" and "prevention", as well as the implementation of full-fledged care for the sick and the elderly. AOIKAI Medical Corporation has more than 130 facilities, including 32 hospitals, 84 nursing homes, PET cancer centers, home care offices, 12 universities, colleges, kindergartens, 7 social facilities.

The head of the corporation T. Shintani informed about the interim results of his activities in the Republic of Uzbekistan, including the establishment of the Tashkent representative office "AOIKAI TASHKENT" and online training in medical and pharmaceutical disciplines by professors of the University "Iryo Sosei" students of TMA and TashFARMI.

The head of the corporation, T. Shintani, also noted with satisfaction about the recently opened training center - "AOI TASHKENT Japanese Language School" within the framework of the project to train personnel for the care of the elderly. Currently, Japanese language training is already being organized for graduates of universities and colleges of medical direction up to the N4 level. Those selected will be sent to Japan as interns for further language training and knowledge of care, followed by employment for a period of 3 to 5 years in geriatric homes and hospitals "AOIKAI Medical Corporation".

During the discussion, the Japanese side announced further directions and stages of joint activities in the period 2021-2030, including the training of specialists in caring for the elderly, the opening of a mini-bank, the Tashkent representative office of Ireo Sosei University, the creation of the international clinic "AOIKAI TASHKENT" and construction smart town - "Japan City".

T. Shintani especially noted the firm intention to implement the projects agreed with the Uzbek side and expressed readiness to further study other mutually beneficial areas of cooperation in the Republic of Uzbekistan.