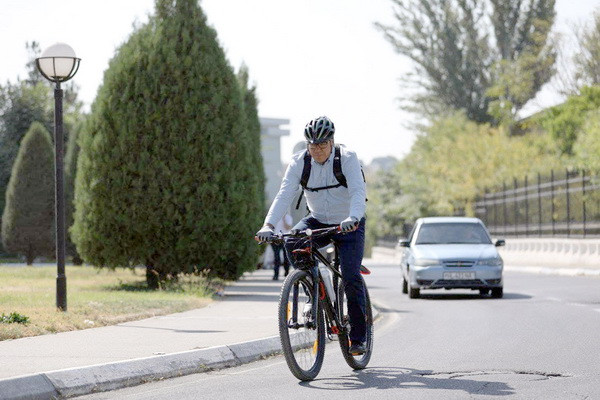 Tashkent, Uzbekistan (UzDaily.com) -- Deputy Prime Minister of the Republic of Uzbekistan - Minister of Tourism and Sports Aziz Abdukhakimov called on the heads of state bodies and local authorities, prominent figures of culture and sports to take an active part in the event dedicated to 22 September - World Car Free Day.

Thanks to the reforms carried out in the country in recent years in the field of sports under the leadership of the head of state, the population's interest in sports and a healthy lifestyle is increasing. A striking example of this is the holding of various marathons and competitions, which are of great interest.

The Resolution of the Cabinet of Ministers "On additional measures to support a healthy lifestyle and increase the physical activity of the population" on 22 September announced: "A day without a car." In this regard, Deputy Prime Minister - Minister of Tourism and Sports Aziz Abdukhakimov addressed our compatriots:

“On the occasion of World Car Free Day, I call on state bodies and local authorities to take an active part in the events for 22 September - World Car Free Day, setting a personal example. I also call on scientists, culture and sports figures, media representatives and all our compatriots to take an active part in mass events on this day and use bicycles or walk instead of cars.

As part of the "Car Free Day" campaign, Aziz Abdukhakimov proposed to reach wider segments of the population using the hashtags #carfreeday_uzbekistan, #shaxsiynamunakursat, #avtomobilsizbirkun. The purpose of such events is to further improve road safety in our country, popularize ecological culture and healthy lifestyles among the urban population. The World Health Organization (WHO) also notes that physical activity plays an important role in the prevention of infectious diseases, cardiovascular diseases, cancer and diabetes. So, in my opinion, holding such events is the right decision in the current global pandemic. "

At the same time, it was reported that during the event, the most active participants of the "Day without a car" will be identified, who will be awarded bicycles and sports equipment.

Earlier on the website "Tourism and Sport" it was reported that a cyclist from Karakalpakstan Ravshan Yakhshimurodov rode a bicycle from Beruni district Karakalpakstan to Tashkent, in connection with this the ministry presented him with a modern bicycle.