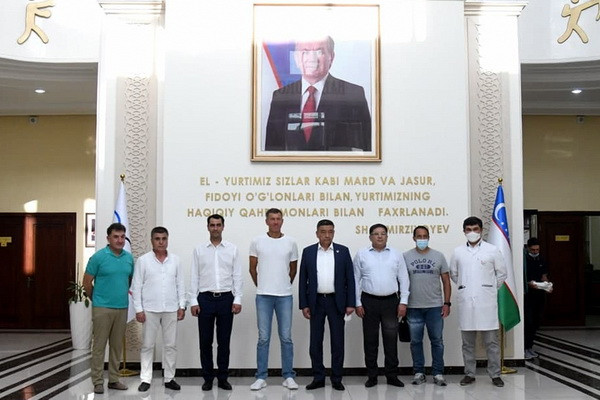 Tashkent, Uzbekistan (UzDaily.com) -- Football coach Srečko Katanec, who is expected to become the head coach of the Uzbekistan national football team, visited the National Olympic Committee of Uzbekistan. The expert from Slovenia was met by the leadership of the Committee.

The Slovenian coach Srečko Katanec, who arrived in Tashkent yesterday, is expected to be announced as the head coach of the National Football Team. Today, considering the sports infrastructure of our country, he visited the National Olympic Committee of Uzbekistan. The specialist was greeted by the chairman of the NOC Rustam Shaabdurakhmanov, the first deputy chairman of the Committee, the first vice-president of the Uzbekistan Football Association Ravshan Irmatov and officials of the association.

During the visit, Srečko Katanec learned about the rich history of Uzbek sports, about the results of our athletes at the Olympic Games in Tokyo, which recently ended at other major complex competitions and about plans for the future. Also, the specialist was told about the Republican Scientific and Practical Center for Sports Medicine, which was created at the NOC, which provides all the necessary services for our athletes.

The leadership of the NOC noted that it would be nice to see Katanec at the head of our team, expressing hope to jointly implement plans in the near future and wished him success.