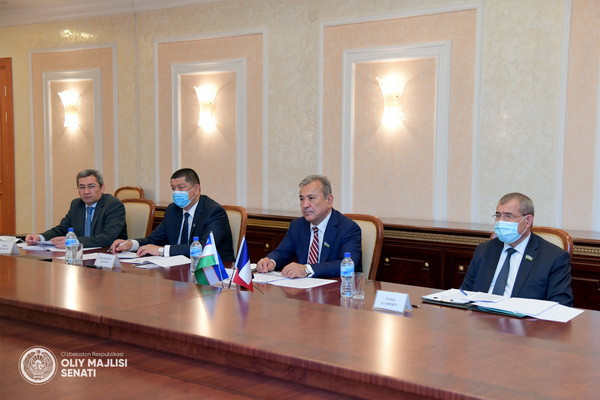 Tashkent, Uzbekistan (UzDaily.com) -- On 11 May, the First Deputy Chairman of the Senate of the Oliy Majlis Sodik Safoyev met with the Minister Delegate for Foreign Trade and Economic Attractiveness of France, Franck Riester.

It was noted that the relations between Uzbekistan and France have significantly strengthened in recent years. The collaboration has great potential, primarily in the trade-economic and tourism spheres, UzA reported.

Mr. Franck Riester highly appreciated the reforms carried out in all spheres under the leadership of President Shavkat Mirziyoyev.

The French delegation includes 30 entrepreneurs. They will consider investing in new projects in Uzbekistan.

Issues of bilateral cooperation, including the development of inter-parliamentary relations, were discussed at the meeting. The parties also discussed collaboration in the fields of transport, tourism, industry and culture.

Currently, the City hokimiyat cooperates with France’s SUEZ company in water management, with Veolia – in the implementation of modern management in the heating system. It was noted that the comprehensive development of relations, the attraction of advanced technologies and innovations, the establishment and development of cooperation in tourism, services, manufacturing and education will be beneficial for both sides.

It was stressed that the intensification of cooperation between Tashkent and major French cities in the economic, investment, tourism, scientific, technical and cultural spheres will also serve the interests of the two countries.

The effectiveness of joint work in the development of ICT, in particular, the introduction of innovative startups, was noted. The parties also discussed the prospects for cooperation in tourism.