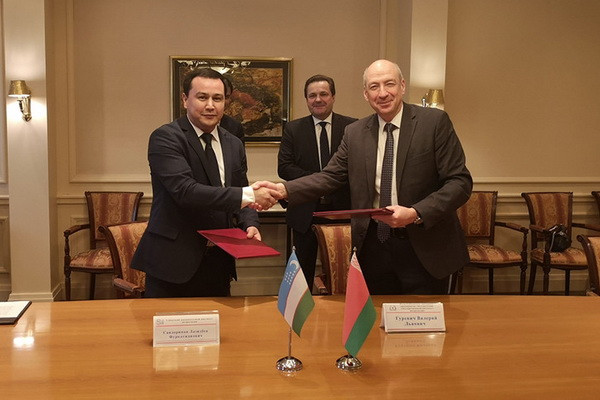 Institutes of Metrology of Belarus, Uzbekistan sign agreement on cooperation

Institutes of Metrology of Belarus, Uzbekistan sign agreement on cooperation

Tashkent, Uzbekistan (UzDaily.com) -- National Institutes of Metrology of Belarus and Uzbekistan have signed an agreement on cooperation. The document was inked in Tashkent by Director of the Belarusian State Institute of Metrology (BelGIM) Valery Gurevich and Director of Uzbek National Institute of Metrology" (UzNIM) Lazizbek Saidoripov on 3 March, BelTA learned from the press service of the Belarusian State Committee for Standardization.

The agreement defines the main areas of cooperation for the next five years. The parties will cooperate in the implementation of programs to develop national and working measurement standards, organize and conduct comparisons. “Another area is participation in the development of interstate documents on the uniformity of measurements to solve the problems of harmonization of national legislation and development of common principles of activity in this area. Specialists of the institutes will cooperate in carrying out work on metrological support of product testing, promote the establishment of creative and industrial relations of metrological services, exchange experience and information,” the press service of the committee said.

The delegation of the State Committee for Standardization of Belarus, headed by Valentin Tataritsky, chairman of the committee, also made a business trip to UzNIM. The Belarusian representatives met with the management and specialists of the Uzstandart Agency. The parties presented areas of works carried out in the two countries and discussed aspects for further cooperation.

The delegation of the State Committee for Standardization of Belarus is taking part in the events of the eighth session of the joint intergovernmental commission for bilateral cooperation between Belarus and Uzbekistan in Tashkent on 3-5 March. The meeting will be chaired by Belarusian Deputy Prime Minister Aleksandr Subbotin and Uzbekistan's Deputy Prime Minister - Minister of Investment and Foreign Trade Sardor Umurzakov.