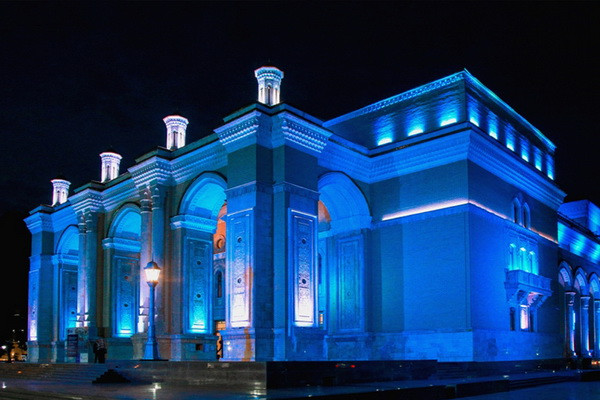 The most interesting architectural sights of the CIS countries

The most interesting architectural sights of the CIS countries

Tashkent, Uzbekistan (UzDaily.com) -- On 19 November, Glavgosexpertiza of Russia is holding the International Conference "Development of the Institute of Construction Expertise" for the fourth time, in which the heads of expert organizations from Belarus, Kazakhstan, Armenia, Kyrgyzstan, as well as Moldova, Uzbekistan, Turkmenistan and Tajikistan are taking part. The press service of the Glavgosexpertiza of Russia decided to tell about the most interesting architectural sights of the countries participating in the conference.

In 2010, the Khan Shatyr shopping and entertainment complex was built in Astana (today the city of Nur-Sultan) - it is listed in the Guinness Book of Records as the world’s largest tent-shaped building. Its height is 150 m, and the area is 127000 m. This "Tsar Tent" was designed by one of the most famous architects in the world - Norman Foster. The building houses cafes and restaurants, cinemas, attractions for children and a water park with a real tropical beach. Khan Shatyr was built according to the same principle by which real nomadic tents are installed: a transparent polymer coating is stretched over a network of steel cable ropes. Due to its composition, the building protects the interior of the complex from both frost and heat.

Talking about the most famous buildings of Uzbekistan, one should, of course, recall the masterpieces of Islamic architecture: Registan Square in Samarkand with the divine mosque Bibi Khanym and the Tilla Kari madrasah. Or Bukhara with its Ark fortress and Kalan minaret. But we, perhaps, will devote separate publications to these architectural ensembles, and today we will tell you about a monument of a completely different era - however, masterfully stylized under traditional oriental motives.

In 1945, Aleksey Viktorovich Shchusev, in the past - a full member of the Imperial Academy of Arts and master of the Art Nouveau style, and then - Academician of the USSR Academy of Sciences, author of Lenin’s mausoleum on Red Square and the leading figure of the Stalinist Empire style, built a musical and drama theater in Tashkent, which is now famous as the State Academic Bolshoi Opera and Ballet Theater named after Alisher Navoi.

This building, which harmoniously fits into the space of the city, has become one of the symbols of Tashkent. On the facade, decorated with bas-reliefs, there is a three-arched portal with paired columns in the middle and pylons on the sides. The walls and ceilings of the theater are completely covered with openwork carvings on ganch, a binding material that includes gypsum and clay. For a long time palaces and mosques were decorated with ganch carving in the East.

There are quite a few Orthodox churches in Chisinau that are subject to protection as cultural monuments. And one of the most interesting industrial buildings in the capital of the Republic of Moldova is the water tower built in 1892 by the Russian architect Alexander Bernardazzi. Together with the completion of its construction, a water supply system was first put into operation in the city. The tower, erected in the eclectic style, has withstood all the earthquakes that have occurred in Chisinau over the past 130 years. In 1985 it was recognized as a monument of industrial architecture. Today, the building of the water tower houses the city’s historical museum, where you can learn about how Chisinau was built and developed, starting from the 15th century.

One of the most amazing phenomena of Belarusian architecture is the so-called “defensive temples”: Orthodox churches built as small fortresses. During their construction, the techniques typical for the construction of fortifications in Central Europe were used, so this peculiar architectural style is known today as “Belarusian Gothic”.

But today we will tell you about another Belarusian attraction - about one of the many possessions of the Lithuanian princes Radziwills, Mir Castle, located in te Korelichi district of Grodno region. It was built at the turn of the 15th and 16th centuries. At the end of the 20th century, Mir Castle was restored and included in the UNESCO World Heritage List as an outstanding monument of Central European castle and palace architecture.

Elements of late Gothic, Renaissance and Baroque are intertwined in the architecture of the building. In the museum, which today is located within the walls of the castle, you can see a collection of weapons, costumes, coins, orders and medals, antique furniture from different eras.

Very soon, at the beginning of 2021, the grandiose Istikloliyat Park will be built in the center of Dushanbe with an architectural complex symbolizing the independence and freedom of Tajikistan. Many Tajik and foreign designers took part in the competition for the best project, but the creative group of the Main Department for Architecture and Urban Planning of the capital under the leadership of Dushanbe Mayor Rustam Emomali became the winner. The complex, which in the near future will become the main attraction of the Tajik capital, will be built on an area of 29 hectares. The height of the stele in the central part of the park will be 121 meters. The stele, which will be crowned with a "toj" (crown), will be erected on a monumental pedestal and surrounded by beautiful fountains. A museum and an event hall will be located inside the pedestal. On the territory of the complex there will be a waterfall, gazebos, squares, decorative pools with canals and wide walkways.

After the terrible earthquake in October 1948, which practically wiped out Ashgabat and destroyed two-thirds of its population - more than 100,000 people, there were no historical buildings left in the capital of Turkmenistan. Several buildings in the style of Stalinist classicism were hastily erected here - rather modest, completely ugly and therefore not the most popular.

Modern construction in Ashgabat and, in particular, the Rukhiet palace is of real interest. It was built in 1999 by order of the first president of Turkmenistan, Saparmurat Niyazov, and by the project of the largest French construction company Bouygues, which is responsible for the Channel Tunnel, the Defense Arch in Paris and Charles de Gaulle Airport.

The palace building is crowned with turquoise domes, and the facade is decorated with white marble. You hardly notice the interior decoration against the background of a giant carpet called "President" - its area is 294 square meters, size - 14x21 m and weight - more than one ton. In addition to a huge conference hall with a capacity of up to 3000 people, the palace houses a library and a concert hall. Official events, concerts, exhibitions and mass celebrations are held in Ruhiet.

We could enumerate for a long time the stunning Armenian monasteries and churches, whose age hovers around 1000 years, or recall the slender Hellenistic temple of Garni, destroyed almost 500 years ago by an earthquake and rebuilt from the ruins during the Soviet era.

But since we cannot give preference to any of the numerous monastic complexes, cathedrals, fortresses and monuments of Armenia (which we will definitely write a separate article about), we decided to remind about the relatively modern sight of Yerevan - the cascade of fountains that adorns the city center.

The construction of the cascade began in the 1970s. But after the terrible earthquake in Stepanakert in the late 1980s and the collapse of the USSR, construction was frozen. However, American millionaire Gerard Cafesjian decided to invest a huge amount in this long-term construction - and he brought it to an end. This is how an amazing object appeared in Yerevan, uniting all the milestones of Armenian history. The cascade "begins" at the bottom step, symbolizing the ancient state of Urartu, and then, step by step, rises to the top, where the stele "Revival of Armenia" is installed. In 2011, a center named after one of the most famous Armenians in the world - Charles Aznavour was opened at the upper tier of the "Cascade".

The cascade is striking in its scale: its length reaches 500 m, its width is 50 m, and the height difference is 100 m. Beautiful views of Yerevan open from each tier, and Ararat is visible from the top in clear weather.

22 km from the city of Talas, northeast of the Karool-Choku mountain, there is one of the most mysterious structures in the country - the Kumbez Manas mausoleum, which had a significant impact on the development of architecture throughout Central Asia. It is believed that the legendary hero of the Kyrgyz epic, the great commander Manas, is buried here, and his wife, the beautiful Kanykei, erected the mausoleum. However, it is already practically reliably known that Manas was secretly buried in a remote place near some cave: this was done so that enemies could not desecrate his body.

Already today, scientists have established that the mausoleum was built in 1334 for the burial of the daughter of the Emir Abuka. The height of the mausoleum, built of clay bricks, is 11 m, and the length of the facades is 7 meters each. The roof of the mausoleum is domed, octagonal, and the facade is decorated with geometric ornaments in the Kyrgyz national style. Surprisingly, such a compact building gives the impression of a grandiose monumentality.