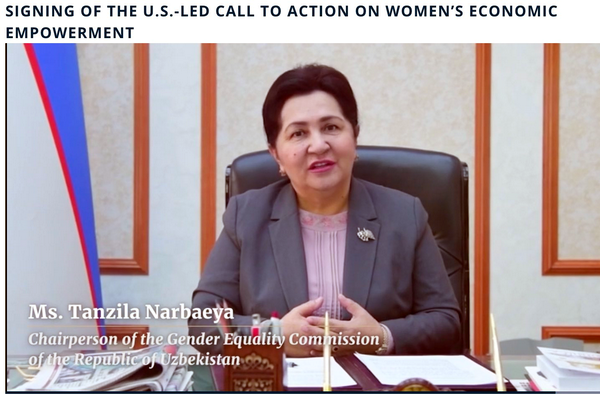 Uzbekistan joins US call to Action to Empower Women

Uzbekistan joins US call to Action to Empower Women

Tashkent, Uzbekistan (UzDaily.com) -- According to the Embassy of Uzbekistan in Washington, on 23 October 2020, a delegation of Uzbekistan led by Chairperson of the Senate Tanzila Narbaeva took part in the international forum on the theme “Call to Action on Women’s Economic Empowerment”, organized by the US Department of State in a virtual format.

During the forum, participants discussed issues of promoting the economic rights of women, strengthening their role in the global economy, as well as fully ensuring equal conditions and opportunities for self-realization of women entrepreneurs around the world.

The event was attended by high-ranking representatives of the governments and parliaments of Uzbekistan, the USA, Albania, Great Britain, Hungary, Vietnam, India, Colombia, Cote D’Ivoire, Morocco, the Republic of the Marshall Islands, Rwanda, San Marino and Estonia (in total - 14 countries). The heads of the diplomatic missions of these countries, accredited in Washington, were invited to the State Department to participate directly in the forum. Our Embassy was represented by Ambassador Javlon Vakhabov.

The American side was represented by Secretary of State Mike Pompeo, presidential adviser Ivanka Trump, national security adviser Robert O’Brien, and US Permanent Representative to the UN Kelly Craft. The ceremony was moderated by the head of the State Department’s Office for Global Women’s Affairs, Ambassador-at-Large, Kelly Currie.

M. Pompeo, on behalf of the White House leadership, expressed his gratitude to all delegates "for their participation in the forum and the efforts made by the governments of countries to provide women with full opportunities for free participation in the development of the world economy." He stressed that "the United States is proud of the partners’ support for Washington’s initiative and will not forget the leadership of countries in promoting the shared values of peace and prosperity."

As President Trump’s adviser said, “This call to action to empower women, promoted among UN states and based on the principles of the American Women’s Global Development and Prosperity Initiative, recognizes the collective commitment of the United States and 31 countries to providing economic opportunities for women in all over the world.”

R. O’Brien, Adviser to the President of the United States on National Security Issues, stressed that “the forum demonstrates the strong commitment of the participating states to the goals of sustainable world development through the full and unhindered participation of women in economic processes”. “The economic empowerment of women is a key aspect of US foreign and national security policy,” the adviser said.

According to the US Ambassador to the UN, K. Kraft, "the empowerment of women around the world is one of the top priorities of the administration of President Donald Trump." “This event also marks the 75th anniversary of the United Nations agency and the 25th anniversary of the Fourth World Conference on Women, Peace and Security. Women play a critical role in ensuring human rights and maintaining peace,” said the American diplomat.

During her speech, Chairperson of the Senate T. Narbayeva stressed that "active promotion of women’s participation in the political, economic and social life of Uzbekistan is a key task of the government of the republic."

Particular attention of the participants was drawn to a number of decisions made by the Management recently aimed at significantly increasing the role of women in the processes of making vital decisions for the further development of the country.

According to our diplomatic mission in Washington, following the results of the forum, an official ceremony of signing a document entitled “A Call to Action to Expand the Economic Empowerment of Women” took place.

The document envisages the promotion and protection of human rights and fundamental freedoms, confirmation of the key role of the full participation and leadership of women in the prosperity and stabilization of the global economy, and increased participation and cooperation with civil society, especially in the context of the COVID-19 pandemic.

It notes the commitment to the UN Charter and the promotion of gender equality on the eve of the 25th anniversary of the Fourth World Conference on Women, as well as addressing existing and emerging problems in the education and training of women, violence against women in all its forms.

The call focuses on the economic empowerment of women in the UN system in three dimensions: 1) human resources development and skills training, 2) entrepreneurship and access to capital, 3) creating an enabling environment for women to participate in economic life.

In addition, signatory countries point to the need to remove legal, regulatory and other barriers to women’s full and free participation in the economy, including women’s ability to access institutions and capital, own and manage property, travel freely and work for the same positions and in the same sectors as men.

Realization of gender equality, ensuring the right to education for all women and girls, removing obstacles in this regard, ensuring inclusive and equitable quality education, strengthening international cooperation in this direction also became the main points of the document.

In accordance with the agreement reached with the State Department, Uzbekistan became a member of the Major Group of States (31 countries) that supported the initiative of the American side. In virtual mode, the Appeal on behalf of our country was signed by Tanzila Narbaeva.

This document is posted on the official website of the US State Department and is open for accession by other UN member states as an additional group of signatories.

During the meeting of the head of our diplomatic mission in Washington with Ambassador-at-Large K. Currie, the diplomat praised the ongoing reforms in the republic and expressed gratitude to the Uzbek side for such active support of the American initiative in the field of promoting women’s economic rights. K. Currie emphasized that "the speech of the Senate leadership and the prepared video on the country’s achievements in strengthening the role and rights of women in society became a very important and bright part of the ceremony."

As noted by the American diplomat, "the successes of Uzbekistan in the field of gender equality, achieved in recent years, are very impressive and are an example for others in matters of comprehensive support for women in all sectors of the republic’s life." “The very chairman of the Senate Tanzila Narbayeva, having become the first woman - the head of the upper house of parliament, is a clear reflection of the new transformations in modern Uzbekistan,” the State Department representative summed up.