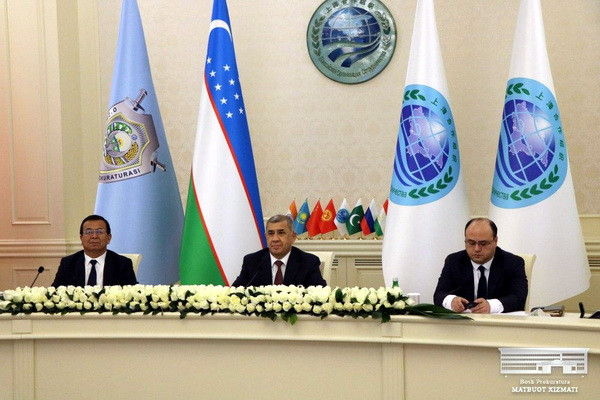 Tashkent, Uzbekistan (UzDaily.com) -- The eighteenth meeting of the Prosecutor Generals of the Shanghai Cooperation Organization member states was held today in a videoconference format.

The meeting was chaired by the Prosecutor General of the Republic of Uzbekistan Nigmatilla Yuldashev.

As noted during the meeting, the Shanghai Cooperation Organization is an effective system for protecting common interests. This influential organization plays an important role in strengthening good-neighborliness and friendship, ensuring peace and stability in the region.

Since the establishment of the Organization, the participating countries have developed a spirit of mutual respect, understanding, a high level of trust and the ability to make joint decisions.

The high level of solidarity and mutual support of the Organization’s member states in the fight against the threat of the century - the coronavirus pandemic - was noted as a vivid example of the manifestation of the "Shanghai spirit".

At the summits of the Council of Heads of State of the SCO member states, the need to consolidate efforts in the fight against crime was noted, including through the expansion and deepening of cooperation of the Organization’s members with observers and dialogue partners.

In this regard, the participation of representatives of the Prosecutor General’s Offices of the observer states and dialogue partners at the eighteenth meeting will serve to further develop and strengthen interagency cooperation in the legal field within the SCO.

Mutually beneficial partnership cooperation of prosecutorial authorities contributes to the achievement of a common goal - to ensure the rule of law of law and order in the SCO space.

Considering that the fight against one of the threats of the century - corruption - is a priority task in the entire world community, including the SCO states, the meeting exchanged experience and effective mechanisms for combating corruption.

The existing problems in this area were constructively discussed and priority measures were identified to consolidate actions in their joint solution.

The meeting participants unanimously stressed that the joint efforts and initiatives of the Prosecutor General’s Offices on a wide range of issues in various spheres of interaction contribute to the growth of the image and further enhancement of the global profile of the SCO in the international arena.

The role of the SCO, which unites more than half of the world’s population, is strengthening as an important mechanism for shaping regional and global policies, ensuring security and sustainable development of the Eurasian continent.

The signed final Protocol reflects the relevant decisions on the main topic of the meeting and the holding of the 19th meeting of the Prosecutors General of the SCO member states in 2021 in the Republic of India.

The eighteenth meeting of the prosecutors general of the SCO member states was held at a high organizational and substantive level, in a spirit of complete mutual understanding and a friendly atmosphere.

The meeting was attended by representatives of the Prosecutor General’s Offices of the Member States, observers and dialogue partners of the SCO, as well as international organizations.

Also, SCO Secretary General Vladimir Norov, Director of the Executive Committee of the SCO Regional Anti-Terrorist Structure Jumakhon Giyosov and President of the International Association of Prosecutors Chkhol-Kyu Hwan addressed the participants of this event.