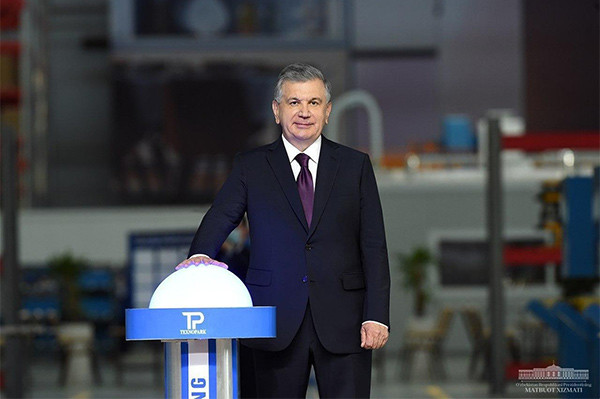 A plant for the production of household refrigerators opens

A plant for the production of household refrigerators opens

Tashkent, Uzbekistan (UzDaily.com) -- The President of Uzbekistan Shavkat Mirziyoyev got acquainted with the projects of the Technopark organized in Yashnabad district last year. Here, in February of this year, the production of electronic gas meters was launched.

Today the second promising facility has been commissioned - a plant for the production of household refrigerators. President Shavkat Mirziyoyev visited the enterprise and launched production by pressing a symbolic button.

Then the head of state, together with representatives of the public, got acquainted with the technological process. The plant, worth US$51.5 million, is equipped with the technology of the South Korean company "Samsung Electronics". Korean specialists were involved in the installation of equipment and the launch of the project.

The production of refrigerators in our country has been established before. This enterprise is distinguished by the ability to produce high-tech products of a new generation with improved characteristics.

- The former aircraft plant ceased operations and remained ownerless. The measures that we have taken here in recent years are gradually yielding results. Our goal is to provide people with jobs and wages, to produce and export competitive products, - said Shavkat Mirziyoyev.

Thanks to the complete automation of processes, the enterprise is able to release products every 19 seconds. It is planned to export 30 percent of refrigerators with high added value. 1,500 jobs have been created here.

In a conversation with public figures, the head of state touched upon the issues of industrial localization. It was noted, in particular, that at the end of 2016, about 100 thousand tons of copper were mined, and by the end of this year this figure will reach 150 thousand tons. In the future, it is planned to increase production to 400 thousand tons. As you know, copper is widely used in the manufacture of industrial products. The increase in production will help replace imports and increase the competitiveness of domestic products in the world market.

The Technopark was established in August 2019. In 2020-2021, it is planned to implement 15 investment projects. It is expected that after their completion, the volume of production by the enterprises of the technopark will amount to 800 million dollars a year.