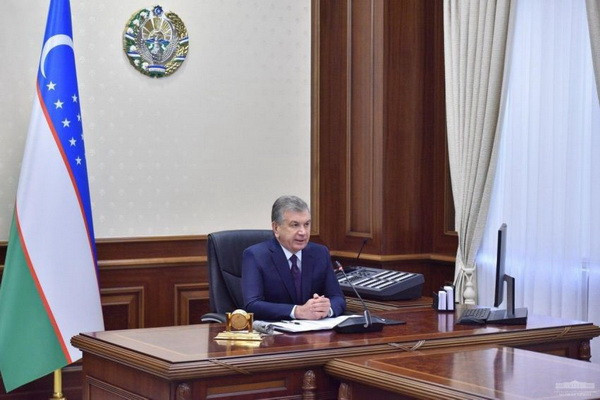 A new geological system is being created in Uzbekistan

A new geological system is being created in Uzbekistan

Tashkent, Uzbekistan (UzDaily.com) -- On 27 August, President of the Republic of Uzbekistan Shavkat Mirziyoyev got acquainted with a presentation on the effectiveness of the work carried out in the field of geology.

In his Address to the Oliy Majlis in January 2020, the head of our state noted that every year priority attention will be given to the accelerated development of specific areas of science. This year, geology has been identified as one of such areas.

The President signed 4 resolutions on these issues. As part of their implementation, the industry is being modernized and digitized, the volume and efficiency of geological exploration is increasing.

- A new geological system is being created in Uzbekistan. The purpose of the development of this sphere is to use natural resources for the benefit of our people, create jobs and improve the well-being of people, - said Shavkat Mirziyoyev.

First of all, the foundations were laid for the revival of geological science and the training of modern personnel. In particular, the University of Geological Sciences was established, and 4 research institutes were united in it.

Modern drilling and laboratory equipment was delivered. As a result, drilling productivity increased by 25 percent compared to 2019. In addition, the number of elements found in ore has increased from 40 to 63. Since the beginning of the year, 150 new fields have been accepted on the state balance sheet. Resources and reserves of gold, silver, uranium and copper are growing. 3 gold deposits were discovered in Kuldjuktau and Auminzatau mountains in Bukhara and Navoi regions, 2 uranium deposits in Kattakurgan district of the Samarkand region and Arnasai district of Jizzakh region.

In addition, mining and geological data on 32 types of reserves were transferred to international JORC standards.

Within the framework of measures aimed at the development of agriculture, hydrogeological studies were carried out by the express method on lands of 155 thousand hectares. In dry areas, water reserves have been confirmed with a production volume of 90 thousand cubic meters of water per day.

The report of the Chairman of the State Committee for Geology and Mineral Resources was heard at the event. The course of attracting foreign investment in the development of 20 new fields was considered on the basis of an open and transparent procedure, through online auctions. Instructions were given regarding public-private partnership in this direction.

Further measures were discussed to improve the efficiency of work in the field, strengthen its legal framework and build up investment potential.

The head of state gave specific instructions to expand the scale of geological exploration by 2 times next year, identify new promising areas, and accelerate the introduction of modern laboratory equipment into the field.

The State Committee for Geology has been instructed to organize exploration of new areas on the basis of cooperation, and to further expand the practice of transferring work on the development of found deposits to the private sector.

It is pointed out that it is necessary to establish, based on the Namangan experience, permanent geological expeditions in each region, especially the hydrogeological direction. The tasks were determined to improve the efficiency of exploitation of the subsoil plots provided for use, to develop scientific research work. Responsible persons were instructed to develop a "road map" for the implementation of the planned measures.