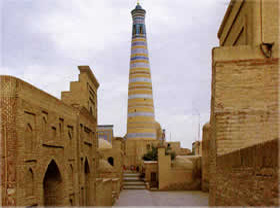 Tours to Uzbekistan presented in Luxembourg

Tours to Uzbekistan presented in Luxembourg

Tashkent, Uzbekistan (UzDaily.com) -- A tourism potential of Uzbekistan has been presented at the international tourism fair VAKANZ-2014 in Luxembourg.

Jahon news agency reported that it was organized by the exhibition center Luxexpo in cooperation with administration of Luxembourg.

Over 100 companies from Benelux states, Germany, Italy and France participated at the company, the report said.

Belgium’s Travel Sensations presented Uzbekistan at the exhibition. It was noted that Uzbekistan created modern infrastructure and implements measures to preserve historic-cultural heritage, which help to develop the sector.

The brochures and flyers about routes and services for tourists in Uzbekistan were presented at the exhibition.