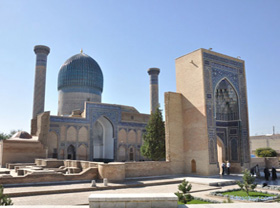 Tashkent, Uzbekistan (UzDaily.com) -- Tourism potential of Uzbekistan was presented at annual tourism fair in Leuven, Belgium. The fair was organized by the leading tour operator of Belgium, Hobo Reisen. Over 40 countries participated at the event.

Jahon news agency reported that diplomatic mission of Uzbekistan in Belgium organized the stand of the country. The stand, which was decorated in national style, attracted attention of the participants and the visitors of the fair.

The documentary film about history, culture and architectural heritage of the Uzbek people was shown at the fair. The special attention was paid to achievements of Uzbekistan in various areas and measures, adopted in the country to develop national tourism infrastructure.

The report said that the preliminary applications to organize tours to Uzbekistan were received from the representatives of Benelux states.