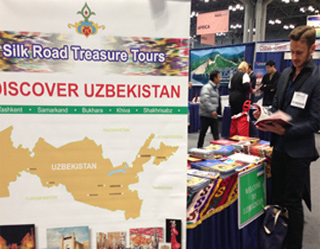 Tashkent, Uzbekistan (UzDaily.com) -- Asrlar Sadosi Festival of Traditional Culture, organized annually by Fund Forum in Uzbekistan, has been presented at New York Travel Show, one of the largest international tourism exhibitions in the United States.

On 18-20 January, Fund Forum in cooperation with Silk Road Treasure Tours (USA) and at the support of Consulate General of Uzbekistan in New York participated at New York Travel Show. The event is organized by The New York Times and American Express. Some 500 tour firms from 150 counties participated at the event, which was attended by 20,000 persons.

Fund Forum presented information about its Asrlar Sadosi Festival of Traditional Culture, which was attended by over 200,000 people in last five years.

Fund Forum said that the visitors familiarized with catalogue of Asrlar Sadosi and its author Gulnara Karimova. Two presentations with concerts were held within the exhibition.