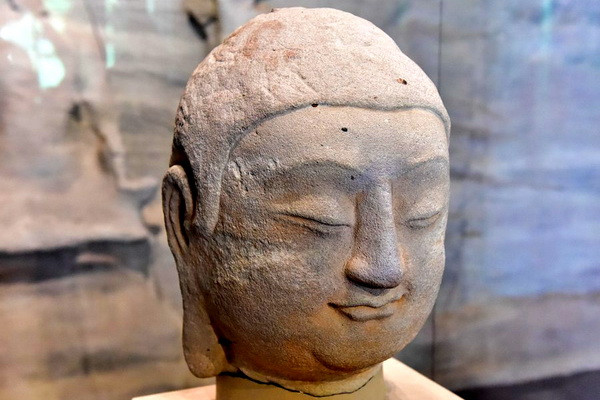 Tashkent, Uzbekistan (UzDaily.com) -- A stone Buddha head that was stolen from a grotto in China's Shanxi Province almost a century ago has been returned home from overseas, Xinhua reported.

The Buddha head belongs to one of the many stone statues in north China's Tianlongshan Grottoes, in the city of Taiyuan in Shanxi Province.

It was the 100th relic retrieved by China from overseas in 2020 and the first Buddha sculpture from the grottoes to be brought back from Japan in almost a century, according to the National Cultural Heritage Administration (NCHA).

Construction of the Tianlongshan Grottoes began around the Eastern Wei Dynasty (534-550) and continued until the Tang Dynasty (618-907). The site features 25 caves and over 500 Buddha statues, reflecting the sophisticated carving skills and grotto art of the time.

Examinations and evaluations conducted by experts after the Buddha head arrived in Beijing found that the relic was stolen from a statue in Cave 8 of the grottoes in around 1924.

The NCHA first identified the Buddha head in September 2020 when the sculpture resurfaced at a Japanese auction house. The house cancelled the auction after the NCHA contacted it and requested that the sale be halted.

The Buddha head was brought back to China from Japan in December last year.