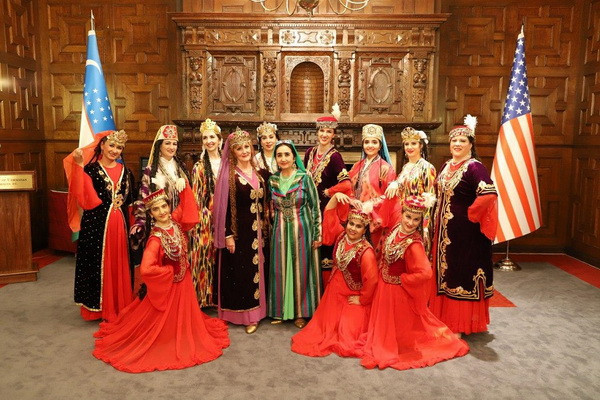 Tashkent, Uzbekistan (UzDaily.com) -- The Embassy of Uzbekistan in the United States, as part of the work to popularize domestic culture and art, together with the American art company "Silk Road Dance Company", organized a two-week training "Central Asian Dance Camp 2020" on teaching the art of national dances, Dunyo news agency reported.

This event was timed to coincide with the celebration of the 29th anniversary of the Independence of Uzbekistan and was held remotely. The event was attended by representatives from 11 US states. These include regions such as Virginia, California, Kentucky, Colorado, Louisiana, Massachusetts, Maryland, Ohio, District of Columbia, Tennessee, and Florida.

The co-organizer of this event from the American side was the world famous scientist, the head of the Silk Road Dance Company, Laurel Gray. In 1984, she founded the Uzbek Society of Dance and Culture, and in 1994, she established the annual Central Asian Dance Camp. She was awarded the International Prize for the title “Best Choreography” (2003) and “Best Ethnic Dancer” (1999).

During her speech, Laurel Gray noted that “this program for the study of dance in Central Asia is the 17th in a row. This time, the event is special - for the first time we will conduct our trainings in a virtual format due to quarantine restrictions during a pandemic. "

“Usually, elements of national decor, art objects, traditional fabrics, suzane on the walls, all this creates an atmosphere of real Uzbekistan for the participants,” the American scientist emphasized. In addition, as Laurel Gray noted, “when you learn to dance, you are not only learning movement or individual elements, you are discovering a new culture, people’s way of life, traditions of that country”.

In order to transfer the exquisite skills of our outstanding performers of national dance, the People’s Artist of Uzbekistan, the famous choreographer Kadyr Muminov, who has devoted his whole life to studying the art of dance and training young talents of our country, was involved in the program. For 60 years, Kadyr Muminov directed many groups of artists, including the State Song and Dance Ensemble "Uzbekistan".

As the people’s artist noted, “only national dance is able to tell about the traditions, foundations, mentality of the people without words”. In his performance with elements of dance and music, he talks about how not easy the path of formation of Uzbek dance was and what changes it is undergoing today. “If the whole culture, the peoples of the whole world is a whole ocean, then the Uzbek dance culture is like a river that flows into this ocean,” Kadyr Muminov stressed.

In accordance with the Central Asian Dance Camp 2020 program, in addition to a number of lectures on the history of Uzbek dance, practical classes on dances of Khorezm and Bukhara regions, a virtual tour of the Embassy was held, the preparation of pilaf by the chef of the diplomatic mission was demonstrated, a virtual tour of the Tamara Memorial Museum was organized Khanum.

Choreographic lessons became a quality filling for the theoretical knowledge of American participants. Particular emphasis is placed on the reflection of the lifestyle of the Uzbek people in the elements of dance. These presentations were very useful for young connoisseurs of Uzbek dance art, who are getting acquainted with Uzbekistan for the first time.

During a separate virtual tour of the Embassy of our country in the United States, Uzbek diplomats talked about the unique history of the diplomatic mission building, owned by one of the surviving passengers of the legendary Titanic ship. The guests highly appreciated the rich collection of art objects of the Uzbek people, which are carefully kept in the museum of the Embassy.

An additional attribute to the busy program was a visual demonstration of the preparation by the chef of the Embassy of our gastronomic brand - festive Uzbek pilaf. All the details and secrets of the traditional Uzbek dish are explained to the participants in detail. All those present watched the process with great enthusiasm and promised to cook pilaf themselves at home.

With the support of the Ministry of Culture of our country, a virtual tour was also organized to the memorial museum of Tamara Khanum, the famous Uzbek dancer and actress. It is emphasized that Tamara Khanum was not just a dancer, but a real reformer of the traditional Uzbek dance style. Her research in the fields of song and dance folklore helped to create a genre of song and dance miniatures. It was noted that the artist’s repertoire includes more than half a thousand songs in more than 80 languages, numbers with national dances and other choreographic performances.

In order to visually demonstrate the acquired skills, a virtual concert was held where American performers were able to show their talent. Choreographies of such famous Uzbek masters were used in the dancers’ performances.

In order to visually demonstrate the acquired skills, a virtual concert was held where American performers were able to show their talent. Choreographies of such famous masters of the Uzbek school of dance as Kunduz Mirkarimova, Rushana Sultanova, Isakhar Akilov and others were used in the performances of the dancers. “Munozhot”, “Mustakhzod”, “Dilkhirozh”, “Samarkand Ushogi”, “Daryo Toshkin” were performed in colorful national costumes.

At the conclusion of Central Asian Dance Camp 2020, Laurel Gray noted the following in her interview:

“For the world community, especially in the Western world, Uzbek dances are new, but very interesting and attractive. We see that girls from different parts of the United States gathered with great interest to learn the art of dance in your country.

Personally, I want to spread Uzbek national dances more and more widely. Your people have shown great hospitality during the years of my life in Uzbekistan. My teachers Kizlarkhon Dustmukhamedova, Kodir Muminov, Viloyat Akilova, Galiya Izmailova helped me to understand from the inside the essence and charm of such a unique art.

The art of dance must be passed down from generation to generation. It may seem that teaching young girls from another culture is unusual for your dance. But both they and I cannot resist beauty and subtlety. I would like to express my sincere gratitude to all those who helped me in organizing this program, especially the team of the Embassy. "

The event organized at the Embassy in 2019 was attended by People’s Artist of Uzbekistan Kizlarkhon Dusmukhamedova.