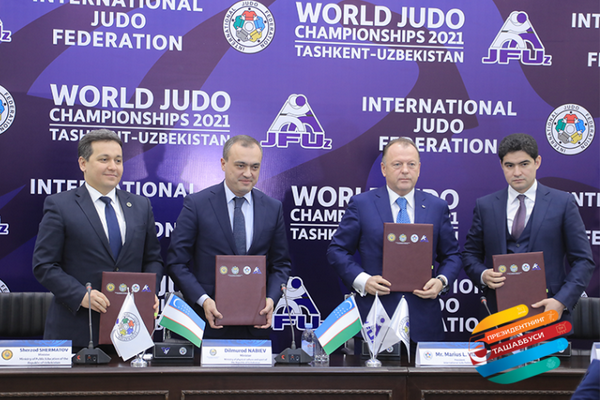 Judo in Schools is an IJF project. The main goal of the program is to teach children aged 5-12 years old social, educational and physical skills through judo.

Judo founder Jigoro Kano regarded his art as a mean of forming a harmoniously developed personality. He believed that judo is not so much defense without weapons as a philosophy of everyday life. The judoist’s code of honor includes such qualities as politeness, courage, sincerity, honesty, modesty, self-control, loyalty to friendship, respect for others.

Within the framework of the program, IJF will provide one tatami for training and 50 kimonos for children in each school, which will allow to develop judo in Uzbekistan and organize children’s leisure in their free time.

It should be noted that the program "Judo in schools" is already being implemented in schools of Uzbekistan in cooperation with Uzbekistan Judo Federation. Now the program covers 20 schools in various regions of the country. In these schools, sections of judo are created, where about 900 schoolchildren train.

The IJF donated tatami and kimono to these schools, and also covers the cost of coaching staff.

As a result of the implementation of the new agreement, the number of schools covered by this program will reach 40.

The Minister of Public Education of Uzbekistan Sherzod Shermatov noted: “Five initiatives of the President of Uzbekistan are actively implemented in schools of Uzbekistan. The second initiative is aimed at developing the physical training of youth, creating the necessary conditions for the manifestation of their abilities in sports. The cooperation of IJF, UJF and MoPE will allow to prepare not only future champions, but also a harmoniously developed generation. We thank the IJF and the UJF for their cooperation and we hope that the Judo in Schools program will cover even more general educational institutions of the country. ”

It should be noted that within the framework of the five initiatives of the President of Uzbekistan in 2019, more than 1.1 million children were attracted to sports sections.