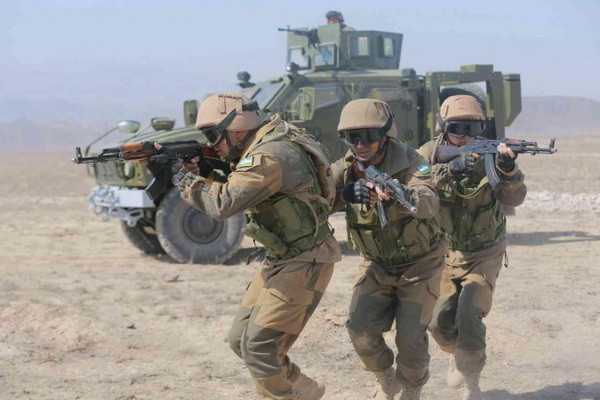 Tashkent, Uzbekistan (UzDaily.com) -- As previously reported, the Center-2019 large-scale strategic command and staff exercise will be held on 16-21 September.

The military contingents of seven countries — Russia, Kazakhstan, China, Pakistan, Tajikistan, Kyrgyzstan, and Uzbekistan — will take part in these exercises.

At the first stage of the training at the Gurumsaray training ground, located in Namangan region of the Republic of Uzbekistan, the military personnel of the defense ministries of Uzbekistan and Tajikistan will work out issues of joint peacekeeping and security in the Central Asian region, demonstrating the readiness of the Armed Forces to protect national interests.

The exercises, which last for five days, include the participation of servicemen of the military command bodies and several units of the Ministry of Defense of Uzbekistan and about two hundred servicemen of the Tajik Armed Forces.

During the exercises, which will be held in several regions of Namangan region, military contingents, in the conditions created for the exercise of the conditional military-political situation, are working out the issues of command and control in the fight against international terrorism, repelling air strikes, conducting reconnaissance and search and defensive action.

In the second stage of the exercises, the military contingents of the Armed Forces of Uzbekistan and Tajikistan will continue joint actions at the Donguz training ground of Orenburg region of the Russian Federation.

It should be recalled that previously the military personnel of Uzbekistan and Tajikistan participated in joint exercises held at the Chorrukh-Dayron training center and at the Nurafshon training ground of Tajikistan on 18-22 September 2018.