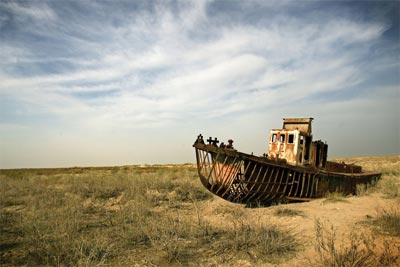 Programme for mitigation of consequences of Aral catastrophe till 2015 approved

Programme for mitigation of consequences of Aral catastrophe till 2015 approved

Tashkent, Uzbekistan (UzDaily.com) -- The Government of Uzbekistan adopted a complex programme for mitigation of consequences of Aral catastrophe, rehabilitation and social-economic development of Aral Sea Basin region for 2015-2019.

The document was developed by the Ministry of Economy, Ministry of Foreign Economic Relations, Investment and Trade, Ministry of Finance of Uzbekistan in cooperation with interested ministries and departments, as well as Executive Committee of International Fund for Saving Aral, Charity Fund for Protection of gene pool of Aral Sea Basin.

According to the document, current ecologic situation in Aral Sea Basin, in connection with drying Aral Sea, is a global problem, which touched not only Uzbekistan, but also all territory of Central Asia.

The document said that since the first days of independence Uzbekistan has been searching for efficient ways of overcoming consequences of Aral Sea catastrophe and implementing measures to rehabilitate ecological balance in Aral Seas in cooperation with the Central Asian states and international community.

International Fund for Saving Aral seas was founded n 1993 with the participation of Uzbekistan, Kazakhstan, Kyrgyzstan, Tajikistan and Turkmenistan to solve problems related to ecological situation in the Central Asian region. The task of the fund to preserve biological fund, support favourable state of environment and improve quality and level of population life.

It was underlined that in October 2014, the agreements were reached on realization of national and regional projects for US$3 billion to mitigate consequences of Aral Sea catastrophe at the conference in Uzbekistan. About US$1.9 billion are long-term preferential loans and US$0.2 billion – grants and technical assistances.

The programme envisages realization of measures on improving system of management, saving and rational use of resources in the region. It is planned to implement eight projects for US$1.098 billion.

About US$433.69 million will be directed to implementation of measures on creation of favourable conditions to rehabilitate and preserve gene fund and health of population, living in ecological risk zones.

It is also planned to implement measures on expanding employment and forming income sources for improving level and life quality of Aral Sea Basin population. Some US$321.2 million will be directed to this direction.

To implement measures on rehabilitation of ecosystem and bio diversity, preserve and protect flora and fauna, it is planned to spend US$158.1 million within 16 projects.

The programme also envisages measures on modernization of production and improvement of infrastructure for ensuring social-economic development of the regions of Karakalpakstan (total cost of projects US$1.921 billion) and Khorezm region (US$375.8 million).