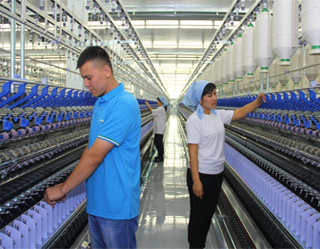 Uzbekyengilsanoat to implement projects for US$232m in 2013

Successful implementation of these projects will help to create over 4,200 new jobs.

Four projects with total cost of US$150 million were launched in 2013.

In particular, Jizzakh Plastex with total cost of US$42 million was commissioned in Jizzkah region. The capacity of the plant makes up 8,500 tonnes of yarn a year.

Indorama Qoqand Textile completed the second stage of the modernization. The cost of the project makes up US$31 million. The venture increases the capacities by 7,000 tonnes of yarn.

Namimpeks Textile completed implementation of the projects with total cost of US$7.2 million. The capacity of the plant is 3,900 tonnes of yarn and 2 million garments a year.

Textile Technology Group invested US$73 million to creation of capacities on production of 6,000 tonnes of yarn a year.

Currently, the textile enterprises are exporting their products to the CIS states, first of all Russia, European Union states, South Korea. There are huge potential to expand exports to Arab states. The enterprises also started to export products to South America, Canada and the United States.

In December 2010, the programme for developing textile industry for 2011-2015, which approved 55 projects, which includes creation of vertically integrated textile complex in various regions of Uzbekistan.

Uzbekyengilsanoat currently includes 290 enterprises of the industry, of which 156 enterprises with foreign investors from South Korea, India, Singapore, Germany, Switzerland, Italy, Japan, the US and other countries.

The light industry attracted over US$2.1 billion investments, which helped create 74,000 jobs. About 70% of workers are women.