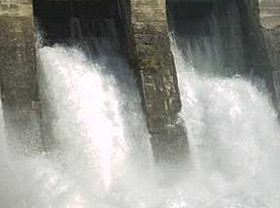 Tashkent, Uzbekistan (UzDaily.com) -- Uzvodenergo (Uzbek Water Energy), which is part of the Ministry of Agriculture and Water Management of Uzbekistan) started construction of Kamchik hydro power station at Ahangaran river of Tashkent region with the cost of US$45.5 million.

Prime agency reported that new power station will have capacity of 18 megawatt and will produce 60 million kilowatt-hour electricity a year in line with the feasibility study, approved in December 2011. The ower station will use natural water flow and it will be constructed in three years.

Uzvodenergo representative said that the company started construction works. It is planned to announce tender on purchase of equipment in the first quarter of 2012. The project will be financed due to own resources of Uzvodenergo.

Uzvodenergo developed a programme on development of small hydro power stations for 2011-2015, which envisages implementation of nine projects with the cost of US$260 million.

It is planned to construct seven new and reconstruct two existing small hydro power stations in Tashkent and Surkhandarya region.

The project implementation will allow to increase generating capacities from 394 megawatt in 2010 to 613 megawatt in 2015, which will allow to increase production of electricity at the small hydro power stations from 1,115 billion kilowatt-hour to 2.19 billion kilowatt-hour in the reporting period. This will help to save 685 million cubic meters of gas a year.

The project will be financed due to resources of Uzvodenergo, received from realization of electricity from existing stations, as well as foreign loans and credits from the Fund for Reconstruction and Development of Uzbekistan.