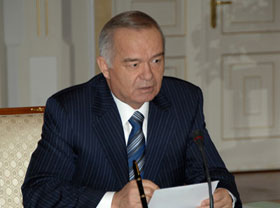 Tashkent, Uzbekistan (UzDaily.com) -- President of the Republic of Uzbekistan Islam Karimov attended summit of Commonwealth of Independent States (CIS) in the city of Moscow on 20 December 2011.

Taking a floor at this venture, President Islam Karimov delivered a thorough analysis of activities by the CIS and its institutions for the past twenty years of its existence. Uzbekistan’s leader stressed that the association played a critical role in securing a harmless dismantlement of the obsolete system during that historic turn. Uzbekistan has from the very moment of the establishment of this institution insisted that the Organization become an association of practical action and a reliable platform for multilateral cooperation of new essence.

The head of our state noted during the meeting that the Commonwealth constitutes an amalgamation of sovereign nations equally interested in creating a steadfast platform for multilateral interaction for the good of their peoples.

For the twenty years of its existence, the Commonwealth has accomplished a lot and continues in this vein.

According to the President of Uzbekistan, it is hard to imagine what we could have had in the post-Soviet environment without the CIS facilitating the interaction in many vital areas, first and foremost in fostering trade and economic relations, communications and transport, maintaining security and humanitarian cooperation.

Uzbekistan expresses conviction that notwithstanding the current similar integration processes underway in the region, the CIS has a future. The Commonwealth is able and ought to play a role of coordinator of common multifaceted interaction and remain as a platform or forum for a direct communication and regular interstate dialogue, including bilateral meetings in CIS format at both the highest and interagency levels.

New integration initiatives and proposals have been pushed forward lately in the post-Soviet realm, with a variety of interstate institutions and unions being shaped. Uzbekistan is going to define its policy in this regard primarily with an eye to its longer-term national interests, by building on the priority directions of modernization of the country currently in progress, along with adhering to the acting national legislation and international commitments.

It was put emphatically that the effectiveness of CIS activities is contingent on the fact as to what extent the projects and efforts undertaken within it will meet the interests of every participating country, will further the practical goals and tasks of securing sustainable development, maintaining security and stability on the entire space covered by the Commonwealth.

The heads of CIS member nations exchanged views on prospects of advancing interaction and issues pertaining to regional and international politics.

Due resolutions have been approved following the CIS summit.