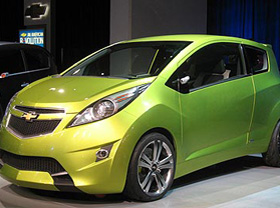 GM Uzbekistan to start production of M300 model in August

GM Uzbekistan to start production of M300 model in August

The launch of the serial production of M300 will allow to increase capacities of the plant by 50,000 units, attract new technologies and create new work places.

Total cost of the project is around US$124.455 million. GM Uzbekistan will produce 50,000 cars annually and part of which will be exported. The project will financed due to own resources of the venture’s founders and UzAvtoSanoat.